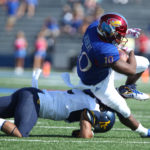 Kansas sophomore running back Khalil Herbert is taken off of his feet by a West Virginia defender during the first quarter on Saturday, Sept. 23, 2017 at Memorial Stadium.

Just 53 Saturdays ago, Khalil Herbert cut around, sped past and bowled over West Virginia defenders to finish with a whopping 291 yards in a game Kansas lost, 56-34.

Herbert carried the ball 36 times that afternoon and has 28 carries five games into this season.

How did he do it?

“After that first drive, we just realized we could run the ball that day,” said Herbert, who is averaging a career-high 5.7 yards per rush this season. “I guess the O-line was in sync that day and they were opening up the holes. The coaches saw that and kept calling the plays.”

West Virginia safety Dravon Askew-Henry put the blame on the Mountaineers instead of giving credit to Herbert.

“I can promise you that won’t happen again,” Askew-Henry said at Big 12 Media Day. “He really wasn’t doing anything special. We just missed tackles that day that we don’t miss.”

Actually, Herbert made them miss so many times with sharp cuts he just kept piling up yardage on a day the defense couldn’t stop West Virginia from amassing 635 yards in offense, including 347 through the air.

Herbert, a 5-foot-9, 210-pound junior from Miami, said he was “a little surprised” to learn after the game that his yardage total had reached 291. Receiver Steven Sims said it would have been higher if not for his own speed.

“Khalil kind of broke out and he came my way,” Sims said. “I just assumed Khalil was faster than what he was and I took off running with him and I thought he was by my side and I missed a block. Man, Khalil probably would have had like an 80-yard touchdown run. I told Khalil: ‘My fault.’ I missed that block. I have to get him back for that one.”

Sims looked up and to the left, a tell that he still was envisioning his missed block.

“It would have been a big run,” Sims said. “I’ll never forget that play.”

Pooka has shot loose for runs of 41 yards or longer in all four games of his college career, which is why KU needs to keep giving the ball to him more than anybody else.

But based on what Herbert did to West Virginia last season, he should have his hands on the football plenty Saturday in Morgantown, as well, in a game set for an 11 a.m. kickoff.

Make the Mountaineers prove they can stop Herbert, especially since one of their better tacklers, Askew-Henry, vowed it wouldn’t happen again.