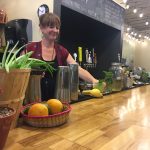 Shantel Grace, co-owner of the new Luckyberry Kitchen & Cocktails, prepares a drink at the downtown restaurant at 845 Massachusetts St.

When I have a pair of people come into my kitchen wearing hazmat suits, I simply dismiss it as another set of complaints about the chili. But for anybody else, the sight can be jarring. It certainly was for the folks at Luckyberry in downtown Lawrence last October.

“We were really surprised by a visit from the feds,” said Shantel Grace, co-owner of the business at 845 Massachusetts St.

Grace said she was not exaggerating when she said federal agents from the Food and Drug Administration entered the building in full hazmat suits. She said they looked just like what you see in the movies.

Luckyberry had gotten into that business by selling its juice at grocery stores and other locations. The FDA shut the wholesale part of the business down in October, Grace said. Grace and her husband, Tim, decided to close Luckyberry in late December. The wholesale juice business was a big part of their strategy for making Luckyberry viable, especially during the cold winter that hurt the store’s walk-in traffic.

So, that is the story behind the closure of Luckyberry. Grace now is touting the story behind its recent reopening under the slightly different name Luckyberry Kitchen & Cocktails. As the name suggests, the biggest change is the business has added a much bigger menu and liquor service. 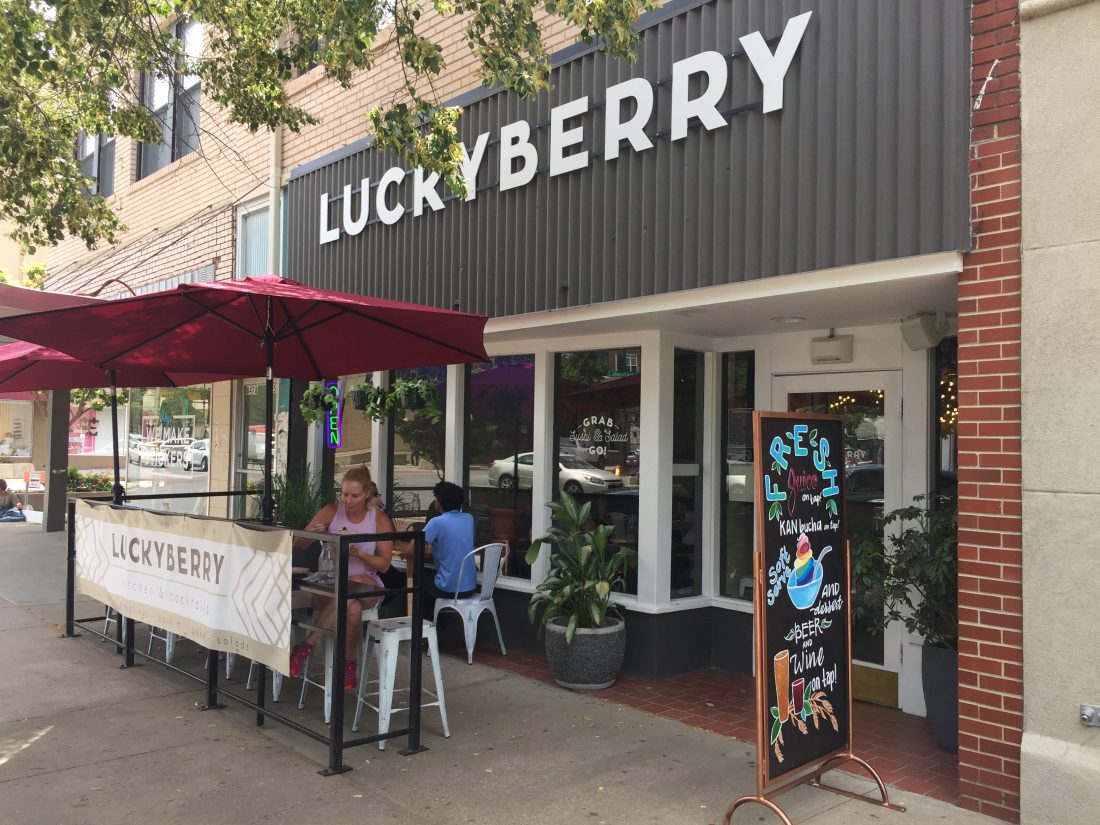 After closing in late December, Luckyberry has reopened with a new menu and a bar at its original location at 845 Massachusetts Street.

The Graces — who are experienced downtown restaurant owners with Ramen Bowls — turned to a fellow downtown restaurant owner for help on the food. Chef Rick Martin of Limestone has become a “creative partner” in the business, Grace said. That means Martin helped Luckyberry recraft its menu to offer more choices, especially for those folks who didn’t want just a juice or plant-based meal.

Grace said the new menu features a lot more items, especially since the old Luckyberry didn’t even have a stove.

“We have fire now,” she said, referring to a major kitchen renovation at the location.

The menu now includes a sliced pork Vietnamese sandwich — called a banh mi — that also features jalapeños and pork skin crumbles. Also on the menu is a bang-bang shrimp dish and several Asian-inspired dumplings, including pork, chicken and crab Rangoon varieties, with a Shanghai-style soup dumpling set to join the menu soon.

“Rick knew that we wanted to bring in more comfort and more comfort food,” Grace said. “We didn’t want to exclude people like our fathers who are Midwestern beef men. We did exclude some people with our original menu.”

Some of the original menu remains, though. In particular, the sushi dishes from the past menu have survived, and several new sushi dishes have been added. In the past, the store offered only grab-and-go sushi, but now it also is offering full sushi dinners for dine-in customers. That’s the other big change with the restaurant. It now is open for supper, whereas before the restaurant closed at 6 p.m.

The other big holdover is the juice. To be clear, the FDA officials found no safety issues with the Luckyberry juice, Grace said, but rather pointed to federal regulations that said once juice is shipped to other locations, it must be pasteurized.

But unpasteurized — or cold-pressed — juice was the whole idea behind Luckyberry. The Graces — along with business partner and downtown landlord Dalton Paley — are passionate about the benefits of cold-pressed juice. Grace said the heat from the pasteurization process causes many juices to lose much of their vitamin and mineral content.

The restaurant will continue to serve a menu of at least five juice combinations — the most popular is called Clean & Clear, which includes cucumber, pineapple, mint and green apple juice. But now the restaurant will start making cocktails with the juices.

Luckyberry has added Kate Frick, the experienced mixologist with Myers Hotel Bar in Tonganoxie, to its staff. She’s using the juices to make unique cocktails like the Cactus. It has cucumber and white grape juice and Chareau, which is a liqueur made with the aloe plant. Just for good measure, the cocktail also has aloe juice and an aloe garnish.

Other cocktails include a Fire Earth, which features rye whiskey, a spicy watermelon juice and radish, and a Tarot Reading, which has coconut cream, gin, mint and, of course, a purple yam. (I can’t tell you how many times a fortune teller has told me purple yam is on my horizon.) In total, Luckyberry has about 10 specialty cocktails, plus about a half dozen house-made sodas and teas.

Grace thinks the cocktails will end up being a standout feature of the new restaurant. She even thinks the specialty drinks give you a unique argument to have another.

“I would advocate that it is a healthier cocktail,” Grace said, noting that you still get the benefits of the juice even mixed with liquor.

Of course, that statement isn’t approved by the FDA. Anyone who says otherwise risks having downtown stormed by two guys with hazmat suits — and straws. 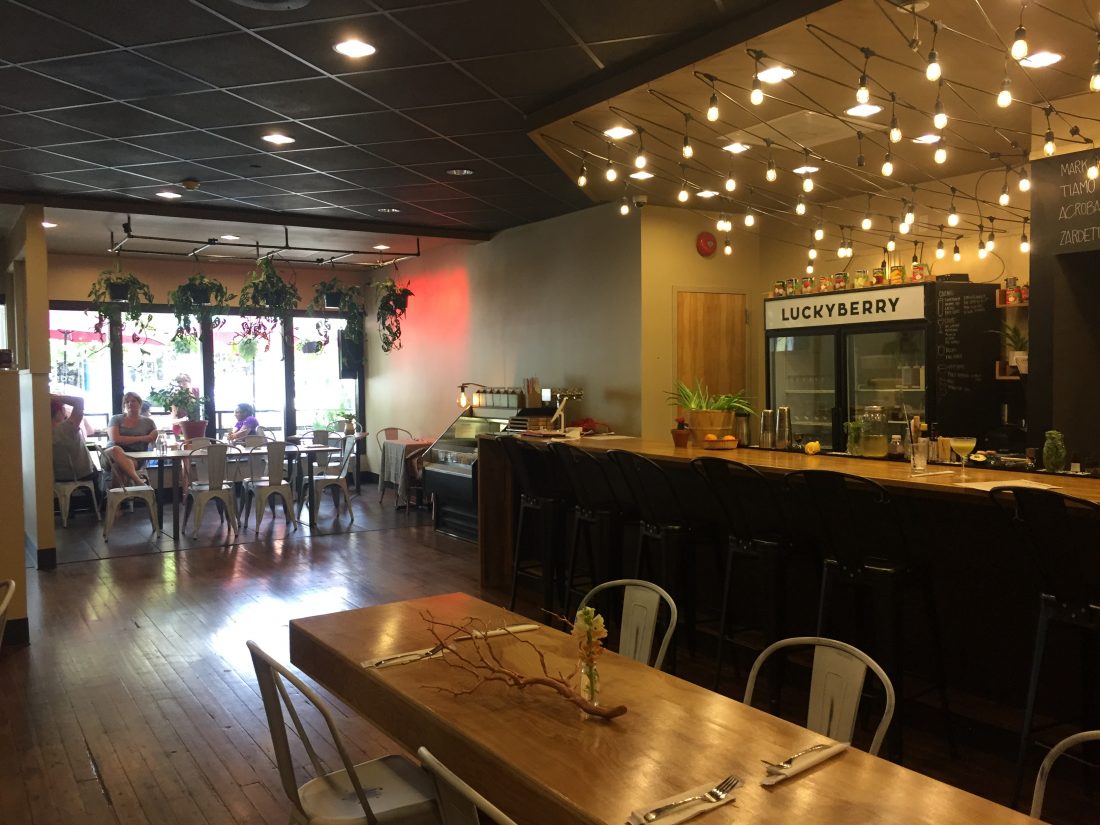