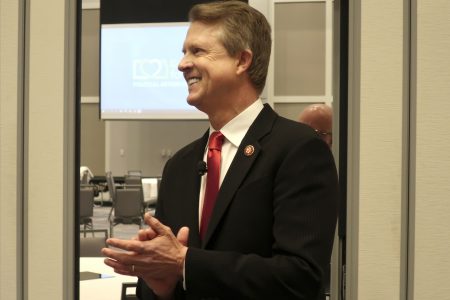 TOPEKA — Roger Marshall represents western Kansas in a congressional district rich in GOP votes and donors that has given the state four U.S. senators over the past 50 years. He’s armed with top-notch endorsements and the equivalent of gold in a GOP Senate primary: a clip of President Donald Trump calling him “a great friend.”

He’s even a doctor whose ads show him at work in scrubs and a white coat, which he’s also worn for interviews.

Still, Marshall is struggling to consolidate GOP support in a primary against former Kansas Secretary of State Kris Kobach, perhaps the most divisive political figure in state politics. Strong doubts about Marshall have some Republicans watching the rise of another candidate in the race and worrying anew whether they’ll be able to nominate a Republican who can pull off what was once expected to be an easy November win.

At stake is the Senate seat being vacated by Republican Pat Roberts, in a state where Republicans have won every U.S. Senate race since 1932.

Kobach’s bid raised concerns that the alienating, far-right Republican might win the nomination, giving Democrats new hope and forcing Republicans to spend money to hold the seat. As the GOP candidate for governor two years ago , Kobach turned off many independent and moderate voters, and Democrat Laura Kelly pulled out a surprisingly solid victory.

With GOP senators in tough reelection races in Arizona, Colorado, Maine, Montana and North Carolina, that’s the last thing Republicans need as fallout from the coronavirus creates additional uncertainty over their prospects of holding control of the Senate.

Republicans’ angst prompted a push by U.S. Senate Majority Leader Mitch McConnell and others last year to get U.S. Secretary of State Mike Pompeo, a former Kansas congressman, to run to secure the seat. Pompeo said firmly that he wouldn’t, but the talk still bubbles up.

Republicans are spooked because the presumed Democratic nominee, state Sen. Barbara Bollier, a retired Kansas City-area doctor, raised nearly $3.5 million for her campaign by the end of March.

Marshall was party insiders’ answer. But for all his advantages, his campaign has struggled to win over conservatives who have distrusted him since he defeated tea party favorite Rep. Tim Huelskamp to win his seat in Congress four years ago.

That has made it difficult to unify the anti-Kobach vote in a crowded field, which includes the campaign of a Kansas City-area plumbing company owner promising to help Trump disrupt Washington.

“President Trump has to deal with a lot of crap,” Bob Hamilton says in his second television spot. “What he needs is a good plumber.”

In an interview, Marshall said the race is “right where I thought we would be right now.”

He believes a crucial boost came in late April from an endorsement by the Kansas Farm Bureau, long influential in rural Kansas. He has the backing of 96-year-old Kansas icon and former U.S. Senate Majority Leader Bob Dole, the 1996 GOP nominee for president.

He has treated patients in Kansas City, Kansas, and southwest Kansas, where outbreaks have hit the meatpacking industry, and pushed his staff to help wrangle testing supplies and personal protective equipment for the state.

“There’s just never been a more important time to have a physician in some type of a leadership position,” Marshall said in an interview. “My focus has been to be that message of hope, to help Kansans get back on their feet to get us safely through this Chinese coronavirus.”

“When it becomes that, I think Kobach wins,” he said.

The Senate Leadership Fund, a GOP group with close ties to McConnell that works to protect the party’s Senate majority, has opposed Kobach from the start as a polarizing candidate who could lose the general election. Asked if it might intervene in the primary to help defeat Kobach, spokesman Jack Pandol said it hasn’t ruled anything out.

Yet one GOP strategist said Republicans are closely watching Hamilton, the plumbing company owner, who is largely funding his own campaign through loans. The strategist, speaking on condition of anonymity to describe internal GOP thinking about the race, said those searching for an alternative to Kobach appeared to be divided, leaving a path for a Kobach win.

Kobach decries the effort to get Wagle and Lindstrom out. His brand is popular enough among conservatives to give him a solid base as he sells himself as someone “not bound by the establishment.”

“They don’t want just muddling around in the status quo,” Kobach said.

Meanwhile, Kobach has been growing soybeans, hunting a turkey or two and connecting with supporters on Zoom and in Facebook live sessions. He warns in online and television ads that it has been too easy for Chinese nationals to enter the U.S. through the southern border, tying concerns about the coronavirus pandemic to the border wall he champions.

Marshall criticizes China too and says repeatedly that he’s voted with Trump 98% of the time in the House.

But an anti-Marshall PAC, Free Forever, said in an ad that the congressman can’t be counted upon to support Trump after initially supporting Ohio Gov. John Kasich in 2016.

Kobach was the first prominent Kansas Republican to endorse Trump in 2016 and has served as an informal adviser, something he emphasizes.

“How do you out-MAGA that?” Miller said.