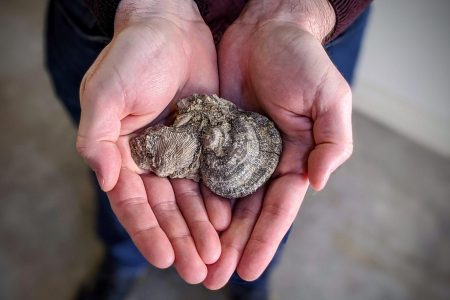 A couple hundred million years ago, an ocean covering Kansas teemed with prehistoric life. Yet for millennia, Kansas has been a dry, sometimes even dusty, place.

The ocean is long gone, but traces of that long-ago aquatic life lie right below your feet captured for the ages in fossil form. Now, paleontologists from the University of Kansas have an app that they hope will help motivate people to go out and find it.

The Digital Atlas of Ancient Life app was created by a group of paleontologists and researchers led by KU ecology and evolutionary biology professor Bruce Lieberman.

“One of the goals of our project was to try and make it easier for citizens who might like fossils or maybe could like fossils to maybe go out into the field identify what they found and learn more about the natural world around them,” he said.

The app boasts an extensive database with detailed pictures of fossils common to Kansas.

KU owns thousands of fossil specimens, especially trilobites, cephalopods and ancient clams. The app is one way to share all of that information to smartphones around the world.

If it motivates people to go out and find some of their own, Lieberman said, all the better.

“We really are blessed in the state of Kansas to have lots of fossil resources that can very easily be found by the general public,” he said.

Lieberman offered a few tips for the novice fossil hunter.

Where to find them

Fossils from various geologic time periods can be found throughout Kansas. But Lieberman recommends beginners start their searches in the eastern part of the state. It’s home to rocks from the Pennsylvanian era — about 260 million years ago.

Fossils exist almost anywhere in Kansas where rock peeks out of the soil. Start with a place where a road cuts through a hill.

“Start out looking around near the rocks to see if you find any fossils lying about,” Lieberman said, “Because they’ll just naturally weather out of the cliff.”

Once you’ve done that, begin working your way up. Mike Everhart of Oceans of Kansas Paleontology described the method while out looking for fossils in a road cut east of Wichita on U.S. 400.

People also need to be sure they have permission to look for fossils before venturing on to private land. In Kansas, fossils found on private property belong to the landowner.

Do I need tools?

While some more experienced fossil hunters bring a rock hammer or a chisel, they aren’t necessary. Many fossils can be found in chunks of rock nature has already broken away.

How to identify fossils

That’s where the app comes in. It’s packed with detailed pictures of many of the fossils that can be found in eastern Kansas.

Lieberman said if you’re looking for fossils in eastern Kansas, you’ll want to select the Pennsylvanian time period on the app for the best chance to identify what you’ve found. If you’re farther west, you’re more likely to find a fossil from the Cretaceous period.

Once you’ve selected a time period, compare what you’ve found to one of the pictures on the screen. And after you’ve selected the species you think it is, there’s a map to show you where it’s been found in the past.

Lieberman said there are millions of fossils in Kansas. All you have to do is find some exposed rocks and look.

“It’s really what catches your eye and you find the most exciting,” he said. “There’s no right or wrong way to collect fossils.”

Brian Grimmett reports on the environment, energy and natural resources for KMUW in Wichita and the Kansas News Service. You can follow him on Twitter @briangrimmett or email him at grimmett (at) kmuw (dot) org. The Kansas News Service is a collaboration of KCUR, Kansas Public Radio, KMUW and High Plains Public Radio focused on health, the social determinants of health and their connection to public policy.

Kansas News Service stories and photos may be republished by news media at no cost with proper attribution and a link to ksnewsservice.org.