Topeka — Kansas’ open Senate race has generated close to $14 million worth of ads, with two-thirds of the spending coming from political action committees as establishment Republicans fight to keep hard-right conservative Kris Kobach from winning the GOP nomination.

Political committees are spending more than $9.3 million so far on ads, according to the media tracking firm Advertising Analytics. That compares to the candidates’ $4.6 million, the firm said. Another firm, Media Buying, put the groups’ spending at nearly $9.6 million.

Establishment Republicans and supporters of Kobach, the former Kansas secretary of state, are waging a fierce campaign because many GOP leaders and activists fear the seat will be in play if Kobach is the nominee. Known nationally for advocating tough immigration policies and a take-no-prisoners style, Kobach alienated independent and moderate GOP voters in losing the Kansas governor’s race in 2018.

Spending by the PACs has easily outpaced the candidates’ fundraising in recent weeks. The top three Republicans and the presumed Democratic nominee, state Sen. Barbara Bollier, have raised more than $1.1 million since June 30, but Advertising Analytics said the Senate Leadership Fund’s advertising alone is more — and it’s just one of three groups spending more than $1 million.

“I am just shocked about the amount of outside money,” said Kelly Arnold, a former Kansas Republican Party chairman. “These are numbers that you normally would see in a general election where it’s very competitive, and the national Democrats and national Republicans are battling it out in the state.”

Republicans want to avoid a hot fall race in Kansas as they battle for their 53-47 Senate majority with competitive contests in other states, including Arizona, Colorado and Maine.

The GOP hasn’t lost a Senate race in Kansas since 1932, but Republicans are worried about the fundraising prowess of Bollier, a retired Kansas City anesthesiologist and former moderate Republican who switched parties at the end of 2018. She has raised more than $7.9 million for her campaign, including nearly $730,000 since June 30, easily outdoing the Republicans.

A PAC with Democratic ties, Sunflower State, is doing more than $4 million worth of advertising, according to the two media tracking firms. Sunflower State this week had a new 30-second spot describing Marshall as a “creature of the D.C. swamp.”

Many Republicans see Sunflower State’s efforts as meddling in the Republican race to steer the nomination to Kobach. The GOP also has complained that Bollier is enjoying a flood of dollars from outside Kansas, and Marshall spokesman Eric Pahls said neither Kobach’s nor Bollier’s supporters “care about the state” itself.

“They’re relying solely on help from Democrats, Hollywood and New York City,” Pahls wrote in a message to The Associated Press.

Kobach also is getting a boost from the Free Forever PAC and did in the past from the small-government, free-market Club for Growth, to the tune of $1.1 million in all, according to Advertising Analytics.

But well-funded groups also are attacking Kobach, including the Senate Leadership Fund. The Kansas City area-based Plains PAC has a campaign attacking Kobach so far worth more than $2 million, and the Keep Kansas Great PAC is attacking both Kobach and Bob Hamilton, a largely self-funded political newcomer. The latter group, the bankers association and the U.S. Chamber of Commerce are together spending $666,000 to boost Marshall, according to Advertising Analytics.

“The Swamp is showing they are willing to spend an ENDLESS amount of money,” Kobach said in a fundraising email earlier this week.

Hamilton is mostly funding his campaign with a $3.5 million personal loan, and he’s flooded the airwaves with 15 television spots. The two tracking firms said his advertising is worth roughly $2.1 million, the most of any Republican running in Kansas.

Marshall is spending about $1.2 million and Kobach about $200,000. Bollier’s advertising is worth about $858,000 so far, according to Advertising Analytics. 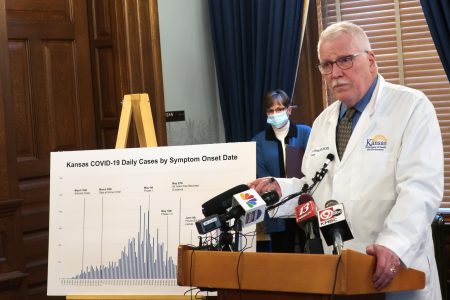