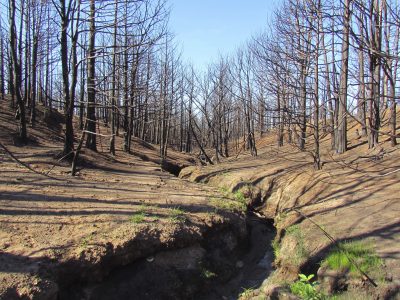 An eastern red cedar infestation in southern Barber County is pictured after the Anderson Creek wildfire in March 2016. That wildfire scorched nearly 600 square miles of land in Oklahoma and Kansas and destroyed homes, killed livestock and damaged thousands of miles of fence. (Aron Flanders/U.S. Fish and Wildlife Service via AP)

WICHITA — Trees improve air quality. They keep people and homes cool with shade. They block the breezes that rake across the Kansas plains.

New research suggests the trees planted by people who filled up Kansas over the last century-plus also made the region more susceptible to hard-to-fight fires.

Historically, the Great Plains had very few trees. The few in the region generally grew only near rivers and streams.

But modern fire-suppression tactics and the spread of homes and businesses, including human-planted windbreaks, nurtured wooded areas.

Preliminary research from the University of Nebraska suggests a connection between the spread of trees in the Great Plains and an increase in the size and frequency of large wildfires.

“Trees promote more extreme wildfire behaviors that are much more difficult to suppress,” said Victoria Donovan, a postdoctoral researcher at the University of Nebraska. “In the Great Plains, in general, if you have woody vegetation we see a higher wildfire risk.”

Kansas experienced its largest wildfire ever in 2017. The six largest fires ever have all been recorded in the past 25 years.

Donovan says one of the best ways to control the spread of trees into grasslands is through controlled prescribed burns. Fire used to be a more natural part of the ecosystem. Reintroducing it will help keep the grass healthier and eliminate unwanted trees.

While fire departments in the state have decades of experience putting out grass fires, they’re rookies at combating increasingly common woodland fires.

“There’s definitely a difference in the fire regime once you start getting a conversion from natural prairie grass to the brush and timber types of fuels,” said Eric Ward, an assistant fire management officer at the Kansas Forest Service.

First, Ward said, you can’t drive through it. Second, patches of trees like the eastern red cedar will often develop a layer of broken branches and needles on the ground that’s 2 to 3 inches deep.

“When that gets to burning, it may just be barely smoldering and you can spray water on it and it looks like it’s out,” he said. “But you can have fire several inches below the surface just smoldering.”

If the wind picks up, smoldering embers can start more fires.

In Manhattan, areas that were open grass pasture two decades ago have become overgrown thickets — thicker with fuel for wildfire and tougher for crews with hoses to attack.

That’s prompted the state to overhaul its wildfire training with a greater emphasis on wooded areas.

Christopher “Chip” Redmond is a meteorologist at Kansas State University who manages the state’s network of weather stations.

“It helped extensive … grass growth,” he said, “which is our primary fuel in Kansas.”

Even if winter and spring remain wet, grass can dry out in as little as an hour.

One good storm system that brings in dry air and strong winds, he said, could trigger large fires in Kansas this spring.

“While some wildland fires can’t be prevented because they spring from lightning strikes or other natural causes,” she said, “many are avoidable by carefully observing basic precautions when using fires outdoors.”

— Brian Grimmett reports on the environment, energy and natural resources for KMUW in Wichita and the Kansas News Service. You can follow him on Twitter @briangrimmett or email him at grimmett@kmuw.org. The Kansas News Service, ksnewsservice.org, is a collaboration of KCUR, Kansas Public Radio, KMUW and High Plains Public Radio focused on health, the social determinants of health and their connection to public policy.