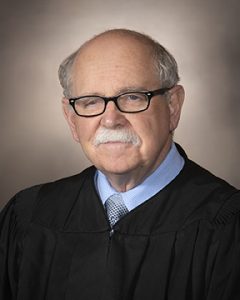 TOPEKA — The longest serving judge on the Kansas Court of Appeals announced on Monday that he will retire on April 3.

Judge G. Joseph Pierron Jr., 72, has written 392 published opinions and heard thousands of appeals since he joined the state’s second highest court in December 1990, the Office of Judicial Administration said in a news release.

“A lot of cases are routine. Criminal cases might not be exciting, but they’re important to the people involved,” Pierron said in the release. “You try to do your best on every case, and some are terrifically complex.”

Pierron resides in Lawrence with his wife, Diana Carlin Pierron, a retired university professor and administrator, according to the release.

The Court of Appeals hears appeals from district courts in civil and criminal cases, except those that are appealed directly to the Kansas Supreme Court.

The Court of Appeals in Kansas consists of 14 judges, although usually a panel of three judges hears an appeal.

The governor appoints judges to the Kansas Court of Appeals, subject to a majority confirmation by the Kansas Senate. The governor has 60 days from the date the position becomes vacant to make the appointment.