Hoses in early December were strewn about at a Clinton State Park sewage lagoon that park crews were draining as part of maintenance project at the site. State officials have now acknowledged they erred by pumping an unknown amount of wastewater from the lagoon onto the ground.

A construction project at Clinton State Park veered off track when wastewater from a sewage lagoon was pumped onto the ground at a site near an open camping area, state officials now acknowledge.

The Journal-World recently received tips from members of the public who became concerned that park employees this fall were using a pump and hose to dewater a sewage lagoon that serves Campground No. 3 at the state park. Crews appeared to be pumping the wastewater onto the ground next to the lagoon, which is across the road from the campground.

“I saw the pumps and the lines and said, ‘Oh, hell no,'” a visitor to the park, who requested anonymity to speak freely, told the Journal-World.

Kansas Department of Wildlife, Parks and Tourism officials — who oversee the operation of the park — initially said the lagoon project was within guidelines set by the Kansas Department of Health and Environment. But when the Journal-World heard contradictory information from KDHE, wildlife and parks officials said an error was made when crews began pumping the wastewater directly on the ground.

“It was a small goof to pump that last bit (of wastewater) onto the ground,” said Jeff Bender, region supervisor for the department of wildlife and parks.

A KDHE official said his agency believed the improper disposal created a low risk to public health and that the pumped wastewater did not travel to the campground sites across the road or into Clinton Lake itself. The topography of the land would make it difficult for the dumped wastewater to flow directly to the campsites, but it could flow through other parts of the park or to the lake. Closer to the site is a popular hiking trail, known as the White Trail, a portion of which is just west of the lagoons.

“I think both agencies have recognized the one area we erred (in) is allowing for the dropping of the hose and allowing that last bit of water on the ground,” said Tom Stiles, director of the bureau of water for KDHE. “That won’t happen again. We will see them do better management of that.”

One area advocate for the outdoors and public lands, however, said the pumping incident still was troubling.

“I thought it was a very haphazard way of doing their job,” said Ned Kehde, a Lawrence resident and professional outdoor writer who was one of the people who reported the incident to the Journal-World. “I thought it could have been very detrimental. It looked bad to me.” 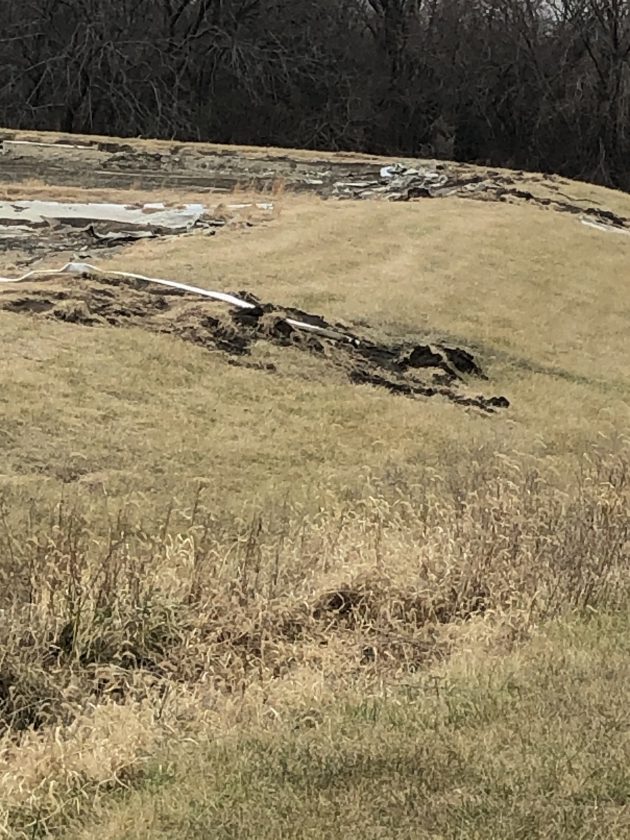 Signs of a residue are left on the ground in early December at a site where state park officials improperly dumped wastewater from a sewage lagoon onto the ground.

The Journal-World received photos from Dec. 8 that showed evidence of the pumping activity. According to a posting on the department of wildlife and parks website, the campground was not closed until Dec. 15. In a subsequent interview, park officials acknowledged some of the pumping likely took place in November, when the campground was open. They said a miscommunication among staff members led to the erroneous statement that the campground was closed at the time. Instead, the restroom and shower facilities of the campground were closed throughout the lagoon project, which prevented new sewage from entering the lagoons.

Stiles, the KDHE official, previously had told the Journal-World his agency would have been more alarmed by the dumping of the wastewater if it had happened at a time when the campground was open to the public.

“That is a whole different thing if the campground had been open,” Stiles said. “That would be a whole other matter, and I wouldn’t expect that to happen at all.”

When Stiles learned that the campground indeed was open, he said he still believed the incident hadn’t created a health risk for people who were staying in the campground, in part because it happened during the offseason rather than the busy summer season.

“Overall, it was a low-risk, low-impact type of event,” Stiles said. “Having said that, both agencies are working to say we can do even better.” 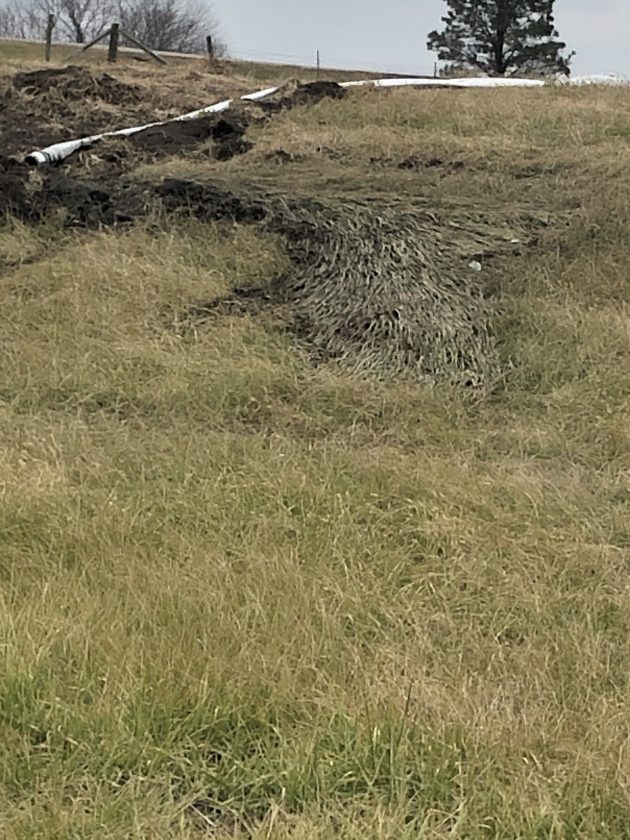 Beaten down grass in the area provide some indication of how much wastewater was pumped from a Clinton State Park sewage lagoon this fall.

Bender said most of the wastewater in the lagoon was removed through an irrigation system, which injected air into the wastewater before it was applied in a wooded area near the lagoon over an extended period of time, allowing it to percolate into the ground.

Stiles, who was not at the site at any point during the pumping, said his information suggests the amount of water was small enough that it minimized any public health risk. However, he said the pumping of the wastewater on the ground did catch the attention of one of his inspectors who visited the site near Christmas.

“What she came upon was a hose on the ground as a means of disposal,” Stiles said. “That caught her by surprise.”

At that point, wildlife and parks officials were told that wasn’t a good method for removing the wastewater. The preferred method is to pump the wastewater into a tanker trunk and haul it to a sewage treatment facility, like one operated by the City of Lawrence.

Stiles, though, stopped short of saying wildlife and parks had violated state code by dumping the wastewater on the ground. He said state regulations aren’t that specific on how to dewater lagoons. Instead, the agency has the ability to make findings that pollutants were disposed of in dangerous ways or without a permit from the state. That finding hasn’t been made.

KDHE was aware of the project at the lagoon, which was part of a larger effort to make repairs to the lagoon’s banks and bottom liner. Stiles said that if KDHE did make a determination that wildlife and parks had violated state regulations, the result likely would have been the same. Wildlife and parks would have been advised of what was wrong and how to correct future actions.

Bender said wildlife and parks will not pump wastewater directly on the ground in future projects. The department earlier this month went through a lagoon operations training session arranged by KDHE. 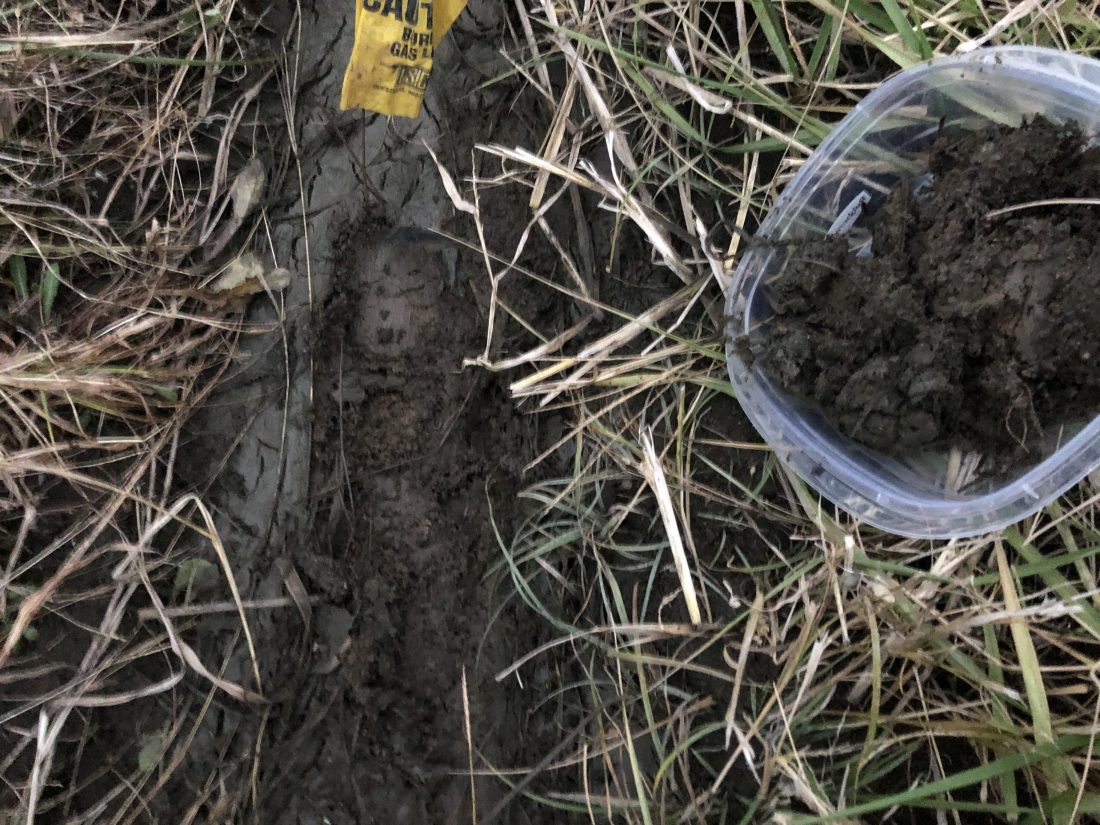 Residue is shown in early December from the area where wastewater was improperly dumped onto the ground at Clinton State Park as part of a sewage lagoon construction project.

No commitment on best practices

Less certain, however, is whether wildlife and parks will commit to following the best practices that KDHE has for dewatering sewage lagoons. As noted earlier, wildlife and parks used an irrigation system to dispose of much of the water in the lagoon. While state regulations do allow that in certain situations, Stiles said it not considered a best practice. Instead, the pump-and-haul system is the preferred method.

“The cleanest way for us to do it is essentially pump it out, put in a truck and get it into the sanitary sewer system of a nearby municipality,” he said.

But Bender said it also is more costly to remove the wastewater in that manner. Those cost concerns stop him from committing to using the pump-and-haul method in the future.

“Maybe in the future that can be looked at,” Bender said. “But our concern right now is rehabbing those lagoon cells. That is the top priority for us right now.”

Kehde, the area outdoors advocate, said he’s concerned that a state agency that has a mission of protecting the outdoors won’t commit to following the state’s best environmental practices.

“Our waterways are pretty vulnerable,” Kehde said. “We have to think more and more about how not to pollute them. These people should be leading the way in helping us on that factor of life.”