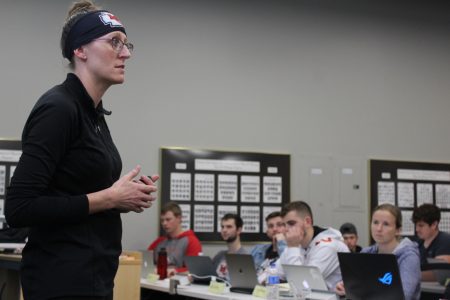 Wichita — Faculty at state colleges in Kansas find themselves armed with fresh ammunition in their ongoing plea for more pay.

Educators say state funding of universities has fallen behind the pace of rising education costs. And they say the smaller paychecks make keeping and recruiting talented professors that much harder.

“We lose excellent candidates who don’t apply in the first place because our starting salaries are lower than our peers,” said Jeff Jarman, the Faculty Senate president at Wichita State University.

The latest numbers from the Kansas Board of Regents show state university instructors — full-time faculty who spend at least half their time teaching — made, on average, $13,796 less than instructors at comparable universities in the 2019 fiscal year.

In other words, instructors made 86 cents for each dollar their out-of-state peers earned. And that’s an improvement.

The year before, Kansas faculty made just 84 cents for every dollar paid to their peers elsewhere. Pay raises for state employees passed by the Kansas Legislature in 2018 and 2019 slightly narrowed the difference.

Universities propose to the Regents what other schools they should be compared to, based on factors like student enrollment and the similarity of their programs.

Instructors at the University of Kansas make significantly more than those at the other Kansas schools — $94,600 on average. But they have one of the widest gaps in the state between their salaries and those working at colleges KU considers its peers.

Indiana University and the University of Buffalo pay their instructors in the six figures, on average. Michigan State University faculty earn $22,000 more on average than those at KU.

In 2018, Wichita State University found the gap was about $20,000 for tenure track faculty. And liberal arts professors found themselves falling further behind their hard science colleagues.

To change that, the university targeted funds at those with the biggest gaps. The school allocated $433,000 to raise salaries for 148 faculty members last year. The school wants to spend more this year.

But those helped by the funding would still make 80 cents to the dollar what comparable schools in other states pay. Completely eliminating that gap would require funding the university says it doesn’t have.

Kansas’ higher education funding increased about 5.7% over the past five years, compared with 18.8% across the country.

“We lose faculty every year who can go to another institution and make $20,000 more,” Muma said.

Muma said that one of the few ways to increase pay includes raising tuition. Compared with other states, Kansas has kept its tuition increases modest, about 3% over the past five years after adjusting for inflation.

With an average salary of $64,200, Fort Hays State University instructors make less than those at most of the other state universities. But Fort Hays is the one Kansas university paying more than its competition, about 4% more.

The university credits its online class success for bringing in some of the dollars needed to offer a competitive wage. The university has also budgeted $1 million over the past two years to raise pay. It plans on adding a similar amount over the next two years.

Fort Hays said it needs a competitive wage because of its location. Moving to Hays can be a tough sell to potential recruits. Better pay can sometimes overcome that.

“We’re out on the frontier,” said Scott Cason, chief communications officer at Fort Hays. “We have to compete a little bit harder.”

— Stephan Bisaha reports on education and young adult life for KMUW and the Kansas News Service. You can follow him on Twitter @stevebisaha.