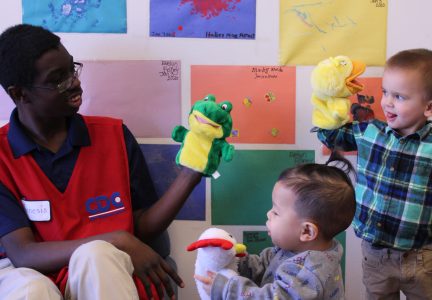 MCCONNELL AIR FORCE BASE — Nikki Heiman was excited to learn that the state was sending a job counselor to work with her son, Trenton, a high school student with Down syndrome.

But that excitement fizzled when Heiman learned the specialist could only meet with Trenton once a month — and only for 15 minutes. That’s all the time the counselor could squeeze into her schedule while handling a large caseload that forces her to shuttle between multiple counties.

“We were very disappointed,” Heiman told the Kansas News Service. “When you cover five counties, you spend so much of your workweek driving and not nearly enough providing services to people who need support.”

State agencies want Kansans with disabilities in the workforce. Even earning a modest wage can bring added purpose and pride to their lives, and stability. But landing and keeping a job, especially for people with cognitive challenges, can prove daunting.

To make that happen, counties across the state turn to the private Project Search program. The national program pairs disabled workers with employers and gives workers some of the special tools they need to keep things humming in an office or on a shop floor.

Genesis Coleman’s long legs made for an awkward fit in a chair made for someone half his size. But he read to the 1-year-old sitting next to him. The day’s book: “Teeth Are Not For Biting.”

Coleman hopes to earn a job working with children, possibly as a teacher’s aide. He has autism and he’s learning at McConnell how to deal with kids. That includes adapting to their heightened emotions, especially sadness.

“I ask them what’s wrong,” Coleman said. “I sometimes just let them just stay with me. And, you know, just tell them it’s alright sometimes.”

Project Search works with 13 Kansas job sites, including hospitals, universities and hotels. Instructors try to keep a light touch on supporting the interns on the job.

“We have high expectations because we don’t want them to fail when they get their full-time, paying job,” said Vicki Rierson, a Project Search instructor for Derby Public Schools.

Besides the work experience, interns spend part of their day in class. The lessons range from financial literacy to self-care — topics meant to help students in their life during and after work.

After eight years in Kansas, Project Search says 74% of its interns land jobs. Only about 46% of working age Kansans with disabilities are employed. For those with cognitive disabilities, it’s 35%.

Project Search helps about 100 interns a year in Kansas. The Kansas Department for Children and Families estimates that more than 16,000 students 16 and older have a disability.

Kansas offers job counseling for students and graduates with disabilities, but the state doesn’t have enough counselors for everyone.

Kansas struggles to hire the counselors it needs because they can make more in other states. Counselors in Nebraska make $20,000 more than those in Kansas.

But the tight Kansas labor market could also make it easier to convince employers to hire more workers with disabilities, their advocates say. They say that with workers scarce, businesses can’t afford to ignore any job applications.

“Any employer you talk to will tell you how hard it is to hire good help these days,” said Rocky Nichols, head of the Disability Rights Center of Kansas. “Well, guess what? There are tons and tons of people with disabilities who have talents, who have abilities and skills, who are being unutilized in our Kansas economy.”

Even after getting hired, Kansans with disabilities still need ongoing support, so do their employers. Advocates say businesses need training in how to accommodate someone with a disability.

With just minimal support, like having an advocate check in at work every few months, 70% of workers with cognitive disabilities stay successful, said Craig Knutson, a policy analyst with the Kansas Council on Developmental Disabilities. He said that without the support, most lose their job after five years.

Employers may need lessons on how to communicate with someone who doesn’t speak. A worker with Down syndrome may need more supervision and direct instructions to stay on task.

And as a task changes — like a filing system going from physical to digital — more training has to happen.

Project Search approached Jennifer Jull-Sullivan about taking on an intern at her veterinary practice a few years ago. She previously had one employee with a disability work at Blair Doon Veterinary Hospital for about a decade. But the employee’s condition eventually worsened until she could no longer work. Jull-Sullivan eventually did take on the intern and eventually hired him as a kennel assistant. That’s a choice she likely wouldn’t have made without support before and after the internship.

“I really did feel like I’d had my hand held all the way through,” Jull-Sullivan said. “It worked very nicely.”