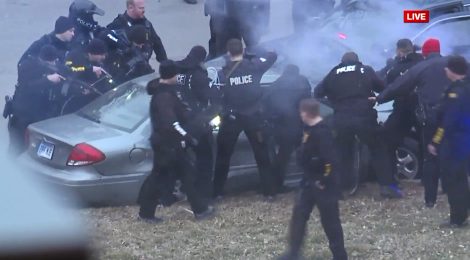 In this image take from video, law enforcement personnel surround a car after it was stopped as the driver approached the crowd near Union Station attending the Super Bowl parade and rally for the Kansas City Chiefs in Kansas City, Mo., Wednesday, Feb. 5, 2020.

Kansas City, Mo. — Officers who stopped an allegedly impaired driver to end a high-speed chase along the route of the Kansas City Chiefs’ Super Bowl parade decided not to shoot at the car or bump it until it slowed down because they feared it could swerve into fans who were already gathering for the celebration, the city’s police chief said Thursday.

Addae Doyle, of Kansas City, Kan., was charged Thursday in Kansas City, Mo., with one count each of resisting arrest, possession of a controlled substance and misdemeanor driving while intoxicated, prosecutors said.

About three hours before the parade began Wednesday, Doyle, 42, drove through a 6-foot barrier at the start of the 2-mile route and reached speeds of up to 60 mph, even after the car’s tires were stripped bare by driving over Stop Sticks, police Chief Rick Smith said at a news conference. Officers were able to slow down the car when it turned, force it into a spin and box it in as it reached an intersection near Union Station, where the route ended and the rally was later held.

Smith and Mayor Quinton Lucas praised members of the Kansas City and Independence police departments and the Clay County (Missouri) Sheriff’s Office for their decision-making and restraint when stopping the car before anyone got injured, including Doyle and a passenger in his car.

Smith said many officers along the route were pushing people out of the way and several wanted to intervene to stop the car “but we were terrified that (the) car would veer off the course, go through the security fence and hit pedestrians that were lining either side of the street.” He also said several officers, including snipers along the route, considered shooting the driver.

“We were very fortunate this ended when it did and how it did,” Smith said. “I can’t thank these officers enough for their decision-making, their abilities, their skill to get this ended correctly.”

Officers found what turned out to be methamphetamine in the car, and preliminary toxicology results showed that Doyle tested positive for meth and cocaine, prosecutors said in a news release, noting that further charges were likely. Prosecutors didn’t release the name of the passenger who was arrested or say whether that person faces any charges.

Smith said Doyle told investigators that he didn’t remember anything that happened after he got high.

Lucas said law enforcement often makes headlines for the wrong reasons, but the officers’ actions on Wednesday were “an amazing example of what went right.” Fans cheered the officers as they arrested Doyle and the passenger at gunpoint Wednesday, and Lucas said the city was grateful to the officers for enabling it to have an “outstanding” parade without a serious incident.

The prosecutor’s office requested that Doyle’s bond be set at $75,000 and said it didn’t know whether Doyle had an attorney yet.

Kansas Suicide Rates Are Climbing, Especially In The State’s Most Rural Areas