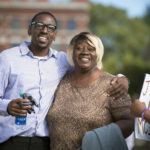 In this Oct. 13, 2017 file photo, Lamonte McIntyre, who was imprisoned for 23 years for a 1994 double murder in Kansas that he always said he didn't commit, walks out of a courthouse in Kansas City, Kan., with his mother, Rosie McIntyre, after Wyandotte County District Attorney Mark A. Dupree, Sr. dropped the charges.

TOPEKA — Kansas is dropping its fight against the compensation claim from a man who spent 23 years in prison for a double homicide before a judge vacated convictions that were secured even though no physical evidence or motive tied him to the crimes, the state’s attorney general said Tuesday.

Attorney General Derek Schmidt said in an Associated Press interview that his office made the decision after reviewing 900 pages of documents from Lamonte McIntyre’s attorney that had not been provided previously. He also said an ongoing Kansas Bureau of Investigation review of the 1994 crimes for which McIntyre, from Kansas City, Kan., was charged turned up new information.

Schmidt said his office will work with McIntyre’s attorney on a settlement to present to a Shawnee County District Court judge. He said that under a 2018 Kansas law, McIntyre is likely to receive $1.5 million from the state — $65,000 for each year he spent in prison — plus money to cover attorney fees and other expenses.

McIntyre’s case was one of several that prompted the law requiring the state to compensate victims of wrongful convictions, and Schmidt, a Republican, had received bipartisan criticism for resisting McIntyre’s compensation claim while agreeing to two others.

“Because we knew there was evidence that was never placed in front of a court, before we just signed off on a claim, we had an obligation to the new court to collect and review all of the evidence,” Schmidt said. “We’ve now done that.”

McIntyre was 17 in 1994 when he was arrested for the killings of 21-year-old Doniel Quinn and 34-year-old Donald Ewing, who were shot in broad daylight.

McIntyre received two life sentences in their deaths, but he was freed in 2017 after a local prosecutor asked the court to vacate his convictions and to drop all charges, calling his case an example of “manifest injustice.” Prosecutors’ case had largely hinged on testimony that was allegedly coerced.

“Today’s decision by the Kansas Attorney General goes one step further, by recognizing that Lamonte qualifies for compensation under the Kansas statute,” Cheryl Pilate, McIntyre’s attorney, said in a statement. “Lamonte is still dealing with the effects of 23 years of wrongful imprisonment, but the funding and other support provided by the statute will now make his load a little easier to bear.”

When signing the wrongful-conviction compensation law, then-Republican Gov. Jeff Colyer apologized to McIntyre and the other men and said, “We will make it right.”

A bipartisan group of legislators had been planning a Feb. 17 rally to show their support for McIntyre and pressure Schmidt’s office into backing McIntyre’s compensation claim. State Rep. Cindy Holscher, a Kansas City-area Democrat, said it was “retraumatizing” for McIntyre to face a court battle over whether he was compensated.

Holscher said many of her fellow lawmakers thought McIntyre had already received compensation from the state.

“I think there was the assumption that, well, of course, he was exonerated, why wouldn’t he have been paid already?” Holscher said. “Many were not aware of the fact that this was going to be dragging out.”

Schmidt said a compensation claim is essentially a lawsuit involving the state. In some cases, he said, his office can decide that compensation is warranted by reviewing the existing court record, but in McIntyre’s case, he wanted to review the additional evidence available.

As for paying McIntyre, he said: I’m hopeful there won’t be much further delay.”

Democratic Gov. Laura Kelly and the top eight leaders of the Republican-controlled Legislature would have to review any settlement language.

Under the law, McIntyre also is due health insurance benefits, financial assistance for higher education and counseling and various social services.

Legislators cited two other men’s cases from northeast Kansas as examples of why the compensation law was necessary.

Kansas agreed to pay $1.1 million to Richard Jones, of Kansas City, Kan., who spent 17 years in prison after being wrongfully convicted of a 2000 robbery that he says was committed by someone who looks just like him. And the state agreed to pay $1.03 million to Floyd Bledsoe, who spent nearly 16 years behind bars for the rape and murder of a 14-year-old girl northeast of Topeka — a crime that his brother confessed to in a suicide note.