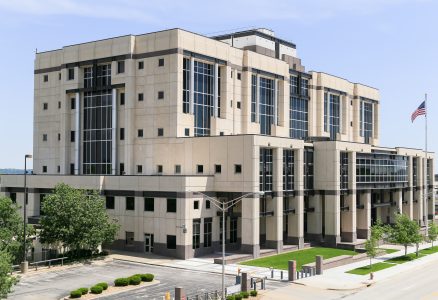 The Robert J. Dole Federal Courthouse for the District of Kansas

TOPEKA — A federal judge in Kansas was publicly reprimanded Monday after acknowledging that he sexually harassed female employees and had an extramarital affair with an offender.

The Judicial Council for the 10th U.S. Circuit Court of Appeals issued an order sanctioning U.S. District Judge Carlos Murguia, who is based in Kansas City, Kan. The order said Murguia also was reprimanded for being “habitually late” to meetings and court proceedings for years.

Murguia was appointed to his federal judgeship in 1999 by then-President Bill Clinton, a Democrat, after serving as a Kansas district court judge in Kansas City. He was the first Hispanic federal judge appointed in Kansas.

He issued a statement Monday apologizing and saying that he took responsibility for his “inappropriate actions.” But he also said his actions “have not and will not interfere with the fair administration of justice.”

“As a result of this process, I have deeply reflected on my actions and have implemented self-imposed corrective measures, both personally and professionally,” Murguia said. “I am truly sorry and am committed to ensuring that such conduct is not repeated.”

The council’s order said there was no evidence that Murguia’s misconduct continued after he was notified of a complaint against him. But 10th Circuit Chief Judge Timothy Tymkovich wrote in the order that Murguia was “less than candid” after being confronted with the allegations.

“He tended to admit to allegations only when confronted with supporting documentary evidence,” Tymkovich wrote. “His apologies appeared more tied to his regret that his actions were brought to light than an awareness of, and regret for, the harm he caused to the individuals involved and the dignity of his office.”

Tymkovich appointed a special committee in August 2018 to investigate a complaint against Murguia, and it interviewed 23 people, according to the council’s order. A public reprimand as “the most severe sanction available” to the council, the order said.

The order said that female employees said that Murguia made sexually suggestive remarks and sent inappropriate texts to female employees and had “excessive, non-work-related contact” with them. It said the employees were “reluctant” to tell Murguia to stop “because of the power he held as a federal judge.”

“One of the employees eventually told him explicitly to stop his harassing conduct, but he continued,” the order said.

The order also said Murguia carried on a “years-long” extramarital sexual relationship with a “drug-using individual” who was on probation but was later imprisoned for probation violations.

“Judge Murguia placed himself in such a compromised position that he made himself susceptible to extortion,” Tymkovich wrote in the order.