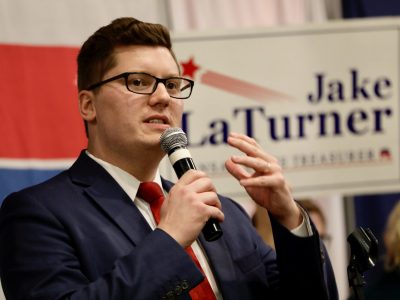 TOPEKA — Kansas Republican congressional candidate Jake LaTurner has hired the former campaign manager of U.S. Rep. Steve Watkins, his opponent in the race for the GOP nomination in the 2nd District.

LaTurner announced Wednesday that Pat Leopold will be a consultant for his 2020 election race. LaTurner dropped out of a campaign for the U.S. Senate last week and entered the 2nd District race to challenge Watkins.

Former Gov. Jeff Colyer urged LaTurner to challenge Watkins, saying he was concerned Watkins could not win re-election in 2020.

Leopold was U.S. Rep. Lynn Jenkins’ chief of staff for a decade in Washington, D.C. He led Watkins’ campaign to a close victory over Democrat Paul Davis in 2018.

Bryan Piligra, a spokesman for the Watkins campaign, said Leopold’s hiring by LaTurner was unimportant.

Topeka — Kansas lawmakers are considering measures that would require the public disclosure of information from ...