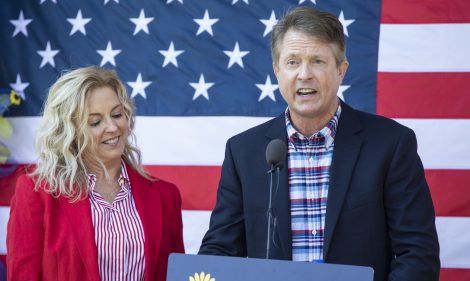 TOPEKA — Western Kansas’ congressman launched a Senate campaign on Saturday, pitching himself to fellow Republicans as a pragmatic conservative who can keep the seat in GOP hands by thwarting immigration hardliner Kris Kobach’s bid for the party’s nomination.

Two-term Rep. Roger Marshall entered the race facing some skepticism from the right despite his anti-abortion and gun-rights views and a consistent record of voting with President Donald Trump. Marshall ended June with $1.4 million in campaign funds, giving him a jump on fundraising.

Marshall kicked off his campaign at the state fair, making the announcement at a podium festooned with state’s ubiquitous sunflowers. In an AP interview beforehand, he stressed his rural ties and portrayed himself as part of a line of western Kansas congressmen who later served in the Senate, including former Senate Majority Leader and Kansas political icon Bob Dole.

Marshall and Kobach are among five GOP candidates actively campaigning to replace four-term Republican Sen. Pat Roberts, who is not seeking re-election in 2020. Kobach, a former Kansas secretary of state, built a national profile by advocating tough immigration policies, though he lost the Kansas governor’s race last year after his take-no-prisoners style alienated moderate voters.

“Nobody is more pro-life or pro-Second Amendment than I am,” Marshall said. “Am I a kinder, gentler voice? Probably. Am I going work across the aisle to solve problems? You bet.”

Despite his assertion that he’d be a more congenial presence in the Senate, Marshall’s announcement Saturday included a scathing rebuke of what he called Democrats’ “liberal, socialist agenda trying to take your way of life” — a clear appeal to the Kansas GOP’s conservative base.

Many Republicans fear a repeat of last year, when Kobach narrowly won a crowded GOP primary only to lose the governor’s race to Democrat Laura Kelly. Some prominent Republicans have been nudging U.S. Secretary of State Mike Pompeo to jump in, though Marshall said Pompeo was “encouraging” about Marshall’s candidacy when they spoke a few weeks ago.

Marshall, who describes himself as a “fifth-generation farm kid,” said he is confident he can win a crowded GOP primary by building on his western Kansas political base. His 1st District covers roughly 60 percent of the state and Dole, Roberts and Kansas’ other senator, Republican Jerry Moran, all held the House seat previously.

Kobach relied on a strong conservative base to win the Republican nomination for governor. He contends that he’ll benefit from the greater voter turnout in a presidential election year and a focus on issues such as immigration. He said in opening his campaign in July that Kansas doesn’t need “a quiet senator.”

Marshall said he’s determined to fight proposals from Democrats, such as “Medicare for All” government health coverage and the sweeping Green New Deal aimed at combatting climate change.

Some Republicans question whether Marshall can win over the hard right and even described him as a moderate in the weeks before he entered the race. The conservative interest group Club for Growth gives him a 61 percent rating through 2018, which is the lowest for any Republican member of Kansas’ congressional delegation.

Marshall, a 59-year-old physician, won his House seat in 2016 by ousting tea party Rep. Tim Huelskamp in the GOP primary. Huelskamp had clashed with House leaders and was stripped of the state’s traditional seat on the Agriculture Committee, which was returned to Marshall.

Marshall had the backing of the U.S. Chamber of Commerce in his 2016 race against Huelskamp. But Scott Reed, who is the group’s senior political strategist and who managed Dole’s 1996 presidential campaign, said it also has encouraged Cobb to explore the race and is waiting to see who runs and “who’s making their marks.”

“We’ll get with many of the other right-of-center groups in D.C. and in Kansas and try to make a decision all together,” he said. “This is a must win.”