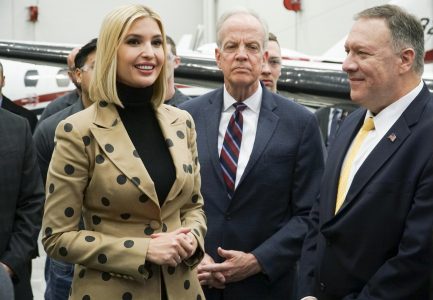 WASHINGTON — Secretary of State Mike Pompeo’s schedule usually reads like a list of foreign capitals. But America’s top diplomat has been finding ways to swing through his home state of Kansas this year, feeding speculation about a potential Senate run and offering something of a refuge from the storm surrounding him in Washington over impeachment.

On his fourth trip to Kansas this year, Pompeo was in Wichita on Thursday for a visit that will get him local voter attention. He held a workforce development roundtable, a topic typically outside his foreign affairs portfolio, with Ivanka Trump, the president’s daughter, adviser and sometime campaign surrogate. He conducted a handful of local interviews and posed for a photo op.

With his State Department at the center of an impeachment inquiry swirling back in Washington, a reporter for The Wichita Eagle asked him a pointed question: “So given everything that is going on in the world right now, you feel that this is the best use of your time as chief diplomat to be here?”

The visit shows how Pompeo is trying to reconcile his conflicting ambitions in Washington and back home in Kansas. But as the impeachment inquiry intensifies, it’s growing increasingly clear that the scandal may even bleed into Pompeo’s political future.

Republicans are eager to see Pompeo, a former congressman, seek the Kansas seat. The state is heavily Republican and has not elected a Democratic senator since 1932, but GOP leaders want to avoid the competitive election that would be likely should conservative lightning rod Kris Kobach win the Republican Party’s nomination.

“You betcha,” Senate Majority Leader Mitch McConnell, R-Ky., said when asked if he wanted Pompeo to run. He said he’s spoken to Pompeo about it “multiple times.”

Pompeo declared in July that a run was “off the table,” but many Republicans didn’t see that declaration as absolute, and he’s remained coy about his plans since.

Kelly Arnold, a former Kansas GOP chairman, called Pompeo “the most popular Republican in the state” and said he continues to excite the party’s base.

“I love the fact that he’s in the position he’s at as secretary of state,” he said. “At the same time, I am selfish and would love to have him representing the state of Kansas, as well, as senator.”

A Senate run would be an abrupt shift for Pompeo, who is deeply enmeshed in an impeachment inquiry that revolves around the question of whether President Donald Trump improperly used American support for Ukraine as leverage against his 2020 rivals. Testimony to Congress so far has revealed that it was diplomats under Pompeo’s command who were involved in the effort and that he knew about it.

What Pompeo did about it is a mystery that he is coming under increasing pressure to clear up.

He’s also under fire for not sticking up for his employees. Trump is furious that a number of State Department employees told congressional investigators that Trump pressured Ukraine to open a corruption probe into former Vice President Joe Biden and his son Hunter.

The White House had ordered them not to appear, but they did anyway after being subpoenaed.

Trump on Wednesday accused one of those employees, acting Ambassador to Ukraine William Taylor, of being a “Never Trumper” diplomat, for providing the investigators with a stark description of what he believed was improper behavior at the highest level of the government.

Vice President Mike Pence jumped in, too, saying, “An awful lot of the swamp has been caught up in the State Department bureaucracy, and we’re just going to keep fighting it.”

“Secretary Mike Pompeo must repudiate this statement,” retired career diplomat Nicholas Burns said. “That’s what a leader would do.”

Pompeo, who had hand-picked Taylor to come out of retirement to be the top diplomat in Ukraine after bowing to pressure to remove Yovanovitch from the post early, privately expressed displeasure with Grisham’s statement, according to two officials familiar with the situation. But he has not pushed back publicly.

The officials spoke on condition of anonymity to discuss private conversations.

The American Academy of Diplomacy has forcefully criticized the attacks from the White House. In fact, the State Department’s new “ethos” — a code of conduct Pompeo himself unveiled earlier this year — would seem to call for a defense to be mounted.

“As a member of this team, I serve with unfailing professionalism in both my demeanor and my actions, even in the face of adversity,” it says. “And I show unstinting respect in word and deed for my colleagues and all who serve alongside me.”

Pompeo, before another friendly audience at the conservative Heritage Foundation earlier this week, made light of his current situation. “Everybody remembers the Bob Dylan song ‘Shelter from the Storm,'” he said. “It’s good to be with you all.”