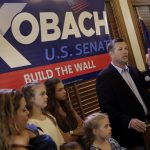 Flanked by family members, former Kansas Secretary of State Kris Kobach addresses the crowd as he announces his candidacy for the Republican nomination for the U.S. Senate Monday, July 8, 2019, in Leavenworth, Kan. (AP Photo/Charlie Riedel)

TOPEKA — Republican Kris Kobach’s campaign for the Senate in Kansas says it has fired an aide after learning he regularly posted hateful comments about Jews and racial minorities on a white nationalist website.

The newspaper said Suber has a history of making anti-Semitic and racist comments on The UNZ Review, a website with white nationalist and anti-Semitic content.

Kobach called Suber’s views “abhorrent” and repudiated them. His campaign said Suber ran errands and did other small tasks.

Suber suggested some of his posts “might be humor.”