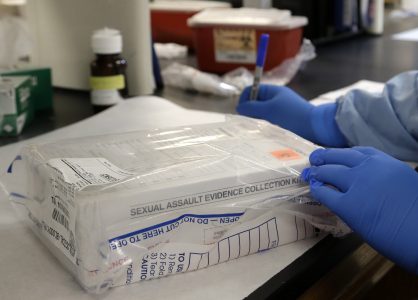 In this April 2, 2015, file photo, a sexual assault evidence kit is logged in the biology lab at the Houston Forensic Science Center in Houston. (AP Photo/Pat Sullivan, File)

TOPEKA — Kansas law enforcement agencies have nearly eliminated a backlog of 2,200 sexual assault kits that had gone untested, including some that dated back decades, authorities announced Thursday.

Agencies have had 2,000 of the kits tested by forensic labs and the remaining 200 should be tested by the end of the month, the Kansas Bureau of Investigation said.

Officials said the additional testing allowed 373 biological profiles from the evidence to be entered into a computerized DNA database and resulted in 243 hits, which could provide leads to law enforcement agencies. Two cases linked to the rape kit testing have been successfully prosecuted and a third resulted in an acquittal, they said.

The bureau also announced it was launching a television and digital ad campaign to create greater public awareness about sexual assault.

“This project has addressed work that was long overdue in Kansas,” Joyce Grover, executive director of the Kansas Coalition Against Sexual and Domestic Violence, said in a statement ahead of a news conference. “I am hopeful we have made and will continue to make big changes in Kansas.”

Last year, the bureau recommended that all rape kits collected in the state go to forensic labs for testing, rather than having law enforcement agencies decide on a case-by-case basis whether to submit them. It launched its effort in 2014 to determine how many sexual assault kits had been collected by law enforcement agencies but remained untested and received a $2 million federal grant in 2015 to tackle the issue.

A KBI working group concluded in 2017 that law enforcement agencies had more than 2,200 sexual assault kits that had not been tested, with the oldest collected in 1989.

In a report that year, the working group said a lack of training about the trauma experienced by sexual assault victims, a lack of trained officers and victims’ advocates, the absence of a statewide policy and public misconceptions about rape contributed to the problem.