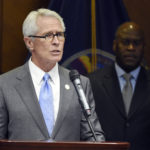 TOPEKA — A former federal prosecutor from Kansas abandoned his Senate run on Thursday and endorsed a fellow Democrat who just entered the race.

Barry Grissom urged Democrats to unite behind state Sen. Barbara Bollier, a retired Kansas City-area anesthesiologist who made headlines in December by defecting from the Republican Party. Bollier was formerly a GOP moderate often at odds with the party’s more conservative leaders and is running as a “pragmatic” Democrat and centrist.

Republicans had attacked Grissom over a federal judge’s ruling in August that the U.S. attorney’s office for Kansas had improperly listened to recorded conversations between inmates at a federal detention center in Leavenworth from 2010 and 2017. Grissom was the U.S. attorney for much of that time but has said he didn’t know about his subordinates’ actions.

Democrats haven’t won a U.S. Senate race in Kansas since 1932, but they see Kobach winning the Republican nomination as their best chance for picking up the seat held by Republican Sen. Pat Roberts, who isn’t seeking a fifth term.

“If we’re going to make history in Kansas, it will require an extraordinary commitment to changing the trajectory of our country, and maybe a little bit of luck, too,” Grissom said in a statement posted on his campaign website. “I know a drawn-out primary would be unquestionably harmful and set us all back in this fight.”

Bollier immediately issued a statement saying she’s honored by Grissom’s endorsement and thanking him for his “steadfast commitment to the people of Kansas.”

Grissom is a Kansas City-area attorney and an executive in a company that invests in the legal marijuana industry. He was U.S. attorney for Kansas from 2010 until 2016 under Democratic President Barack Obama.

Some Democrats think Bollier has a good chance of attracting moderate GOP votes in a general election campaign, particularly if the Republican nominee is Kobach.