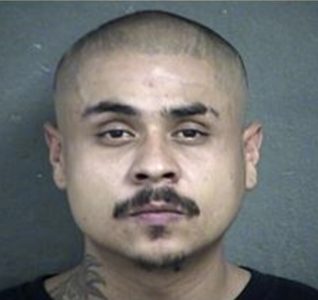 Kansas City, Kan. — A fugitive suspected of taking part in a mass shooting last weekend at a Kansas bar that killed four people and wounded five others was given probation last year for trafficking contraband in prison instead of more time behind bars.

Hugo Villanueva-Morales could have faced up to nine years in prison for the conviction. Instead, he was freed by the same Leavenworth County judge who made news this year when he reduced the sentence of a sex offender because he said the 13- and 14-year-old girls the man abused were actually the “aggressor,” The Kansas City Star reported.

Villanueva-Morales, 29, and Javier Alatorre, 23, are charged with four counts of first-degree murder in Sunday’s shooting at the Tequila KC bar in Kansas City, Kan.

Surveillance video shows Villanueva-Morales entering the bar, where he got into an argument and was told to leave late Saturday, police said. It wasn’t clear whether Alatorre also was in the bar during the argument, but police said the two men later returned and opened fire. Alatorre was arrested hours later in Kansas City, Mo.

Prior to his arrest in the shooting, Alatorre had recently been released from jail in Missouri, where he faced pending charges for tampering with a motor vehicle, possession of a controlled substance and resisting or interfering with an arrest, detention or stop. A judge had reduced his bail in that case and released him on his own recognizance over the objections of prosecutors.

Police searched two homes Tuesday while hunting for Villanueva-Morales but didn’t find him. Authorities warn that he should be considered armed and dangerous.

In August 2018, Villanueva-Morales pleaded guilty to trafficking contraband in the Lansing Correctional Facility, where he was serving time for a 2011 aggravated robbery in Wyandotte County. Leavenworth Judge Michael Gibbens sentenced him to two years of probation because he “accepted responsibility” according to court documents.

County Attorney Todd Thompson said his office argued for prison, but added, “there’s no way anyone could foresee this horrific tragedy from a possession of synthetic marijuana case in prison.” Gibbens didn’t respond to The Star’s request for comment.

Questions also arose after Gibbons eased the sentence for a 67-year-old man in December 2018, ruling that two teenage girls were “more an aggressor than a participant” in a sexual encounter. The case led the Legislature to pass a law that stops judges from reducing sentences for sex offenses against children on the basis that children could be “aggressors” or participants.

At the time of the bar shooting, Villanueva-Morales also was facing charges in an assault case in which prosecutors allege he fought with a sheriff’s deputy outside a Kansas City, Mo., bar. Charging documents say the scuffle happened after an unknown man was kicked out of the bar and returned later with Villanueva-Morales.