Kansas businessman Orman: No plans to run for office again 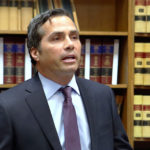 Kansas City-area businessman Greg Orman speaks to reporters after he and his running mate Sen. John Doll delivered more than 10,000 signatures to the Secretary of State's office in Topeka, Kan., Monday morning, Aug. 6, 2018, to formalize their campaign for governor. (Thad Allton/The Topeka Capital-Journal via AP)

TOPEKA — Greg Orman says he has no plans to run for political office “anytime soon” after unsuccessful campaigns as an independent candidate for the U.S. Senate and governor in Kansas.

The Kansas City-area businessman made the statement in an email to supporters Tuesday touting a column for the RealClear Politics website that decried what Orman views as political corruption involving both major political parties.

He quoted Mark Twain: “There is nothing to be learned from the second kick of a mule.”

Roberts is not seeking re-election to the Senate in 2020.