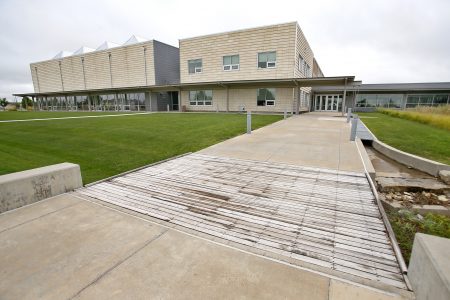 Greensburg — A dozen years after a tornado nearly wiped out Greensburg, city leaders acknowledge that the decision to rebuild as “the greenest community in America” has been a mixed success.

The E-5 tornado on May 4, 2007, killed 11 people and destroyed most of the town. City, state and federal officials quickly decided to rebuild and to emphasize environmentally friendly policies and structures. The effort drew international attention, including a Discovery Channel television series created by actor and environmental activist Leonardo DiCaprio, the Kansas News Service reported.

Greensburg’s leaders sold the green rebuilding plan as a way to set the town apart from other withering rural communities. Today, Greensburg has about 850 residents, about 600 fewer than when the tornado hit.

“I don’t think that population is the only measurement of success,” said Greensburg City Administrator Stacy Barnes.

There are still dead trees, vacant lots in the middle of town and some crumbling foundations where houses once stood. A 72-acre business park designed to attract mostly green companies sits empty.

“We were under the impression that there would be opportunities,” former Mayor Bob Dixson said about the business park. “But it just never panned out.”

Still, there are successes. The town’s new high school brims with technology, and many of the new energy-efficient buildings look like something found in a trendy tourist town.

Barnes, who is Dixson’s daughter, helped her parents sift through the rubble of the family home after the tornado, and then she and her husband decided to move back from Lawrence.

She said she feels “tremendous responsibility” to make the community’s comeback a success.

“Early on,” she said, “there were probably some unrealistic expectations.”

Dennis McKinney, a former state treasurer and one-time legislator from Greensburg, said the town is hurt by a housing shortage that is holding back communities across rural Kansas.

Scott Brown, the owner of an auction and real estate company that was outside the tornado’s path, said developers from Wichita, Kansas City and Denver offered to help rebuild the downtown business district, but walked away when they realized they couldn’t charge enough rent to make money.

After that, Brown led a drive to build a kind of strip mall in the downtown, knowing most of the money would have to come from residents who wanted a place to “get a hamburger (or) get their hair fixed.” He put up the first $50,000 and asked others to give what they could for the Kiowa County United foundation.

When it opened in 2009, the downtown mall was paid for and fully occupied. Over the past decade, Brown said, occupancy has averaged between 80% and 90%.

Brown would like to think that all the community has accomplished since the tornado has made it less vulnerable to the economic and cultural forces threatening the survival of rural communities. He hopes it isn’t destined to become “a ghost town with the newest buildings.”

“I don’t doubt that we’ll survive, but that’s not what we want to do,” he said. “We want to get a little growth.”