As impeachment swirls, Trump nods toward Pompeo run for Senate in Kansas 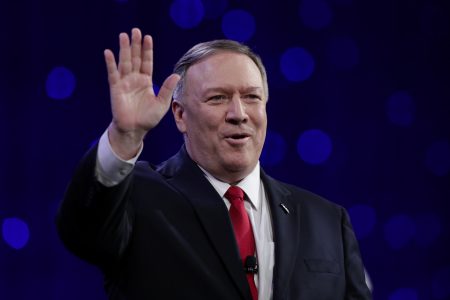 Secretary of State Mike Pompeo waves the crowd before speaking at the 101st National Convention of The American Legion in Indianapolis, Tuesday, Aug. 27, 2019. (AP Photo/Michael Conroy)

WASHINGTON — President Donald Trump on Friday appeared to open the door for the top U.S. diplomat, Mike Pompeo, to leave his post to run for an open Senate seat in his home state of Kansas. Talk about a Senate run has picked up as Pompeo has come under criticism for not defending U.S. diplomats who have testified in the Trump impeachment inquiry, but it is still unclear whether he will run.

Washington has been awash in speculation about Pompeo’s possible departure amid growing strain in his relationship with Trump. The president, in an interview on “Fox & Friends,” appeared to give his blessing to a Pompeo candidacy.

“He came to me and said ‘Look, I’d rather stay where I am,’ but he loves Kansas, he loves the people of Kansas,” Trump said. “If he thought there was a chance of losing that seat, I think he would do that, and he would win in a landslide because they love him in Kansas.”

Many Republicans see Pompeo as their best hope to keep the Kansas race from becoming competitive. A Democrat hasn’t won a Senate seat there since 1932. Talk about a possible Pompeo run has only intensified as the hearings into Trump’s engagement with Ukraine have scrutinized the department he heads.

Pompeo has said he’ll remain secretary of state as long as Trump will have him. Asked if he will push Pompeo to run, Trump was noncommittal:

Pompeo has given no signal that he intends to leave his current job anytime soon, and aides say he has diplomatic travel planned through at least the end of January.

Pompeo ignored a reporter’s shouted question Friday about a possible Senate run when asked about Trump’s comments during a State Department appearance with the visiting foreign minister of the United Arab Emirates. And en route to Brussels on Tuesday, Pompeo suggested to reporters accompanying him that he would be returning to the city several more times as secretary of state.

“He is 100% focused on being President Trump’s secretary of state,” State Department spokeswoman Morgan Ortagus said this week.

The interest in Pompeo, which has been encouraged by Senate Majority Leader Mitch McConnell, is driven by some GOP leaders’ fears that Kris Kobach, nationally known for advocating tough immigration policies, will emerge from a crowded primary race in August. Kobach, the former Kansas secretary of state, rouses Democrats and liberal activists while alienating GOP moderates, and he lost the 2018 governor’s race to Democrat Laura Kelly.

Kobach still has a following on the right, and the buzz about Pompeo is a sign that he remains a formidable candidate. But Rep. Roger Marshall, of western Kansas, had nearly $1.9 million in campaign funds at the end of September — twice as much as Kobach and the other major candidates combined.

Marshall spokesman Eric Pahls said Kobach is “grossly overestimated by the D.C. swamp” and said Marshall continues to stand by the president. Marshall has said previously that he would not run against Pompeo in a primary. As for Kobach, Pahls said, “We have no doubt that Dr. Marshall will clean his clock in the primary.”

The other two major GOP candidates are Kansas Senate President Susan Wagle, of Wichita, and David Lindstrom, a Kansas City-area businessman who formerly played for the Kansas City Chiefs. The leading Democrat is state Sen. Barbara Bollier, a retired Kansas City-area physician who made national headlines in December by switching from the Republican Party.

Trump has suspiciously viewed the parade of diplomats and career foreign policy officials who have testified in the impeachment inquiry that he inappropriately held up military aid for Ukraine to pressure its leader to investigate the Bidens. Trump was eager to paint the officials as “Never Trumpers” or part of the so-called “Deep State” conspiracy meant to unravel him, but a number of the officials were appointed by Trump — at Pompeo’s direction.

The president has complained about Pompeo delivering “disloyal” officials and has privately vented about the secretary of state’s hiring choices, according to three White House officials and Republicans close to the White House, who spoke on condition of anonymity to discuss internal conversations.

And there has been some grumbling among White House aides about Pompeo’s long flirtation with running for the Senate, according to the officials. Pompeo’s trips back to his home state — four so far this year — have not gone unnoticed, and he has not definitively curtailed talk about a run. That has led some in Trump’s circle to wonder whether the secretary of state was plotting an escape strategy.

Yet Pompeo has continued to stay close to Trump. He declined to support State Department employees at a news conference, attacked the impeachment proceedings and refused to publicly break with the president.

Alan Cobb, an active Republican who worked on Trump’s 2016 campaign, said he agrees with Trump’s assessment of Pompeo as a candidate and says it’s “logical” that Pompeo would run to keep the seat in GOP hands.

“The control of the Senate could come down to Kansas,” said Cobb, also the CEO of the Kansas Chamber of Commerce. “Can’t take that chance.”

Kobach and his supporters have long pushed back on the notion that the seat is in danger if he is the GOP nominee. Voter turnout is almost certain to be higher in a presidential election year, and they predict a surge of Trump supporters and argue that the issues Kobach emphasizes — fighting illegal immigration, in particular — will play better in a Senate race than a run for governor.