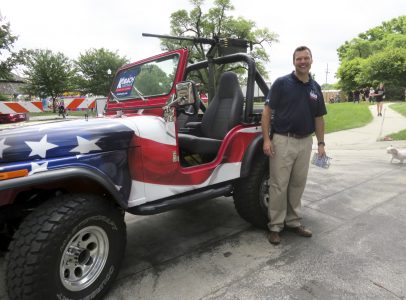 Senate Majority Leader Mitch McConnell and others are so concerned that they’ve spent months urging Mike Pompeo, a former Kansas congressman, to step down as U.S. secretary of state and run for the seat Republican Sen. Pat Roberts is leaving. Pompeo in the race would make it far more difficult for Kobach to win the GOP primary in August.

But Kobach, the former Kansas secretary of state, isn’t softening his rhetoric or putting less focus on the tough immigration policies that built his national profile. He’s tripling down — and deriding critics as “weak Republicans” seeking a “malleable” senator.

“One main reason Republican voters have supported me in the past is that I haven’t waffled,” Kobach said during an interview.

Republican leaders worry about red-state losses that include the Kentucky and Louisiana governors’ races this year. Setbacks in 2018 included Kobach’s loss to Democrat Laura Kelly in the Kansas governor’s race.

Still, Kobach appeals to many conservative GOP voters, and the speculation about Pompeo is a sign that Kobach has a good chance of winning the Senate primary if Pompeo doesn’t jump in. If Kobach had no political base, top Republicans in Washington would not be wooing Pompeo, said Kelly Arnold, a former Kansas GOP chairman.

“This seat would no longer be a priority on their list because they’d know it’s in good hands here in Kansas,” Arnold said.

All the major GOP candidates for Roberts’ seat support Trump’s wall along the U.S.-Mexican border, defend the president, and oppose abortion and gun control. What makes Kobach different is how aggressive he is about poking his critics.

“It’s likability and then, touching-third-rail, caustic comments that drive controversy and nothing else,” said Doug Heye, a GOP consultant in Washington. “Yeah, Donald Trump can do it, but not everybody’s Donald Trump.”

Yet for all the GOP concerns, Kobach’s brand still sells on the right — where the party’s primary races are waged.

“I like a fighter, someone like Donald Trump,” said Sandy Connary, a 66-year-old retired county clerk who attended a Kobach fundraiser in Wichita last week. “He is a known quantity. I know him. I trust him.”

Critics of Kobach’s aggressiveness often reference an iconic jeep he used in the governor’s race for summer and fall parades with a replica machine gun on back. Kobach called criticism of it a “snowflake meltdown.”

“He knew that, that bothered people,” said Tim Shallenburger, another former Kansas GOP chairman and an ex-state treasurer. “He kind of flaunted it.”

The Wichita fundraiser last week featured David Clarke, the cowboy-hat-wearing ex-Milwaukee sheriff who has likened the Black Lives Matter movement to terrorism. Clarke urged the audience of 60 or so people to recapture their anger from 2016.

Kobach is a board member and lawyer for a group collecting funds for the border wall and attempting to build parts of it on its own. He upped the ante on border security with a recent column arguing for American military strikes on drug cartels inside Mexico.

He rouses Democrats and liberal activists like no other Republican in Kansas. An online fundraising site for Democrats’ top Senate candidate, state Sen. Barbara Bollier, features Kobach’s picture and says, “we can beat him again in 2020.”

Wagle took her own fact-finding trip to the border this summer and argues that private wall-building isn’t the proper way to handle border security. Complaints filed by watchdog group Common Cause accuse Kobach of illegally mixing fundraising for the group and his campaign, something he denies.

Kobach has lagged Marshall, Wagle and Lindstrom in campaign cash. He didn’t fill the room at his Wichita event because some of the 100 people who RSVP’d stayed away in the chilly weather.

“It’s not his positions,” said Reed, who managed Kansas Republican icon Bob Dole’s 1996 presidential campaign. “It’s his history as a candidate and the fact that he came up way short.”

Some Republicans worry Kobach can’t win over moderate GOP voters in a general election after spending two decades focusing on illegal immigration as his core issue.

In the governor’s race, Kobach made a migrant caravan moving through Mexico an issue during a late October debate and ran an ad featuring footage from Tucker Carlson’s Fox News show. Bob Beatty, a Washburn University of Topeka political scientist, doubted other Republicans would go as far in playing to fears about illegal immigration.

Yet support for a tough stance on illegal immigration is widespread within the GOP. A September AP-NORC poll showed about 8 in 10 Republicans nationally expressed approval of Trump’s job handling immigration.

“Kobach almost owns the immigration issue in a way that nobody else can,” said Patrick Miller, a University of Kansas political scientist.

Strong criticism of Kobach helps him with some voters. Glen Burdue, a 73-year-old machine shop worker in a small town south of Wichita, said he likes Kobach partly because Kobach “has taken the most flack” for conservative views.

“Not for true conservative Republicans,” he said.