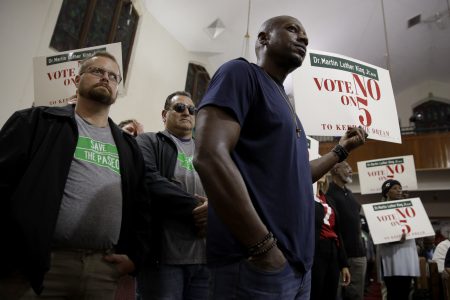 In this Sunday, Nov. 3, 2019 photo, people wearing “Save The Paseo” shirts stand among attendees at a rally to keep a street named in honor of Dr. Martin Luther King Jr. at Paseo Baptist Church in Kansas City, Mo.

Kansas City, Mo. — Kansas City leaders and residents on Wednesday began what is likely to be a challenging conversation about how to honor Dr. Martin Luther King and recover from wounds inflicted during a nearly yearlong debate over naming a street for the civil rights icon in the majority white city.

On Tuesday, Kansas City voters overwhelmingly approved a ballot measure to rename a 10-mile boulevard from King’s name back to The Paseo, which it has been called since it was completed in 1899. The vote came less than a year after the city council approved renaming the boulevard for King, after years of advocacy from the Southern Christian Leadership Conference and mostly black civic leaders.

Representatives from both sides of the issue vowed Wednesday to find another way to honor King and perhaps show other cities how to peacefully unify around the issue.

Diane Euston, a spokeswoman for the “Save the Paseo” group that led the successful petition drive, said the group has been brainstorming for months about ways to honor King if the ballot measure passed, and in a meeting last week with Mayor Quinton Lucas, who strongly supported the King name, members made it clear they intend to be part of that conversation.

“I believe we are going to take positive strides,” she said. “We can in the long run be an example across the nation about what unity is going to look like, what consensus looks like. The people have spoken, and people need to continue to speak in a positive manner in order to show Kansas City is an example of the democratic process while continuing to ensure we honor Martin Luther King.”

Save the Paseo members, many of whom are black, said throughout the campaign that the effort to replace King’s name was not about race. They contended the council didn’t follow proper city process when it voted in January to rename the boulevard for King and didn’t properly engage residents affected by the change. The Southern Christian Leadership Conference and other mostly black leaders accused Paseo supporters of being motivated by racism. Kansas City is 60.3% white and 28.7% black, according to the U.S. Census.

Whether the SCLC will join in the new discussions remains unclear. Its representatives didn’t return messages Wednesday seeking reaction to the vote.

Lucas, who is black, was on the city council when the name was changed. He acknowledged city leaders and the SCLC could have handled the renaming decision better and will learn from Tuesday’s vote. He expects the community outreach and conversation to take some time but said that effort is important.

“I think in terms of the next steps, most everybody I talked to remains committed to honoring Dr. King and his service to country,” Lucas said. “We have a positive opportunity coming out of this. Every now and then we might need a painful start, but people want to make sure we get it right, that we get the collaboration right.”

Alissia Canady, a former city councilwoman who was one of the few black leaders in the city to object to renaming The Paseo, said she also sees the controversy as an opportunity to honor King but also address other issues such as crime and economic inequity.

“We need to have a citywide conversation and be intentional about manifesting King’s dreams, rather than just building another statue or duplicating what others have done,” she said. “It’s a huge opportunity for us to be innovative.”

The next steps are crucial for Kansas City, both to heal from the campaign and to protect its national reputation, said Derek Alderman, a geography professor at the University of Tennessee-Knoxville who has studied the naming of streets for King for decades. Kansas City is one of the largest cities in the U.S. without a street named for King, in a country where, as of 2017, 955 U.S. cities had streets named for him.

“It’s a good sign that people are wanting to come forward and work with the city, but they need to understand it’s going to require sacrifice,” Alderman said. “It’s not as easy as ‘let’s find a convenient street to name for Dr. King.’ They’ll have to change the identity of a street they’ve known for a long time, with business and property owners to bear some costs, along with hard discussions of racism and exclusion. I’m not saying it should be divisive, but it needs to be accompanied with really genuine, hard conversations.”

U.S Rep. Emanuel Cleaver, a former Kansas City mayor who unsuccessfully tried early on to negotiate a compromise on the naming issue, said he’s concerned how Kansas City’s image will suffer when pictures of city workers taking the King signs down are transmitted nationwide. That will occur at some point after the election board certifies Tuesday’s results.

Cleaver said he chooses to believe most of the people who supported The Paseo name were not motivated by racial bias, but that message will be hard to communicate to others.

When he called U.S. Rep. Bennie Thompson of Mississippi Wednesday, the first thing Thompson said to Cleaver was “What in the world are you guys up in Kansas City doing?” Both men are black.

“When you have to try and explain it, it’s already a problem,” Cleaver said. “You’re trying to undo the beliefs that people have developed based on what they’ve seen and heard. It can take a long time to fix that damage.”

Canady said Kansas City leaders can’t be concerned about the optics of how the decision would look to others because they need residents’ confidence to address larger problems and repair the relationships with those who believed their voices were not heard in the street naming debate.

“This is a huge opportunity for Kansas City to be spotlighted for how it unified and engaged people in the civic process in a way we haven’t seen in years,” she said. “Hopefully as we go forward we can start with a clean state and consider all the possibilities.”