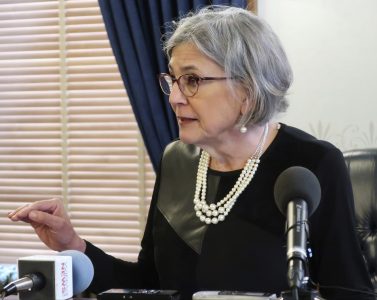 Topeka — A top Republican legislator’s complaint has launched an investigation into whether the commission that screens Kansas Supreme Court applicants violated the state’s open meetings law in picking three finalists for Democratic Gov. Laura Kelly to consider in filling a vacancy.

The complaint from Senate President Susan Wagle is likely to intensify efforts by fellow conservatives to give legislators the power to block a governor’s appointments to the state’s highest court, something they cannot do now. Republicans have had a renewed interest in such a measure since a Supreme Court decision in April protecting abortion rights.

The commission named the finalists for Kelly in mid-October, and they include a Topeka-area trial judge opposed by Kansans for Life, the state’s most influential anti-abortion group. The lawyer-led nominating commission voted on candidates in a public meeting but used paper ballots so that how each member voted wasn’t disclosed during the meeting.

Wagle, a conservative Wichita Republican, filed a complaint Tuesday with Attorney General Derek Schmidt, another Republican. She urged him to declare that the commission violated the Open Meetings Act and its actions are therefore void. Schmidt turned the investigation over to the district attorney in her home county, Sedgwick County.

“Not only do Kansans deserve to know how each commissioner voted, it’s the law,” Wagle said in a statement Wednesday. “This secret vote clearly violated the law and integrity of the system.”

Commission Chairman Mikel Stout, a Wichita attorney, said the panel is making records of how individual members voted available to anyone seeking them.

“We did preserve all of that information,” he said. “It’s all available.”

The Associated Press obtained copies of the ballots Wednesday along with a summary of the commission’s full meeting through the clerk of the state’s appellate courts in Topeka.

The Supreme Court finalists are Deputy Kansas Attorney General Dennis Depew, Assistant State Solicitor General Steven Obermeier and Shawnee County District Judge Evelyn Wilson, who is chief judge for a district that includes Topeka, the state capital. Kansans for Life opposes Wilson because of her husband’s past political contributions to Kelly and other abortion rights supporters who ran for office.

Schmidt declined to investigate Wagle’s complaint because Depew and Obermeier work for his office. And he avoided sending the case to the Shawnee County district attorney because Wilson, a finalist, is a judge there.

Kelly faces a Dec. 17 deadline to make the appointment. Asked about Wagle’s complaint Wednesday, she said, “This is the first I’ve heard of this.”

Retirements will give Kelly two appointments to the seven-member high court in the next few months, and whoever she chooses will go on the court with no oversight from the GOP-controlled Legislature. Her two Republican predecessors had only one appointment between them in the eight years before she took office in January.

The nine-member commission has long interviewed Supreme Court candidates publicly but its deliberations on potential finalists were closed to the public until a 2016 law.

The commission’s Oct. 18 meeting to pick finalists for Kelly’s first appointment was the first time that law came into play. Members had a 90-minute closed session to discuss confidential background checks and personal information about candidates, as allowed, before reconvening their open meeting to vote.

Members had four rounds of paper ballots, without discussing individual candidates’ merits. When the candidates had been whittled down to three, the commission voted unanimously to forward their names to Kelly.

Stout said the commission settled on three strong candidates so the governor “can’t miss” with her appointment. He acknowledged that having public deliberations is “a little awkward” and potentially inhibited comments.

“It would have been nice to have everybody feel a little more comfortable,” he said.

Wagle and other Republicans favor abolishing the commission and having the governor’s Supreme Court appointees face Senate confirmation, arguing that such a process would be more transparent. Making the change would require amending the state constitution.

Jeanne Gawdun, a Kansans for Life lobbyist, said the issue raised by Wagle “screams loud and clear” for change.

State Sen. Ty Masterson, another conservative Wichita-area Republican pushing for Senate confirmation of justices, said: “It just shows that you can be technically open to the public and still hide everything.”