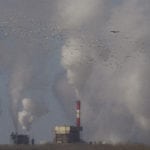 A flock of gulls and another larger bird glide over a field east of Westar Energy's Lawrence Energy Center, on a cold Groundhog Day morning, Monday, Feb. 2, 2015.

The company essentially runs its coal plants year-round, even during the winter months when it’s not cost-effective. An analysis by the Union of Concerned Scientists, which advocates for reduced reliance on coal, said that’s been costing Westar customers $20 million a year in added fuel costs.

But market operators including the Southwest Power Pool (SPP) — Westar buys and sells wholesale electricity through the organization — worry that the practice hurts the market.

Regulators in Missouri, where Westar’s parent company Evergy is headquartered, have opened up an investigation to see if it’s unfairly costing consumers.

The Southwest Power Pool coordinates electricity generation in Kansas and 13 other states, mostly in the Central Plains. It helps make sure there’s enough electricity to meet the needs of users across the service region at the best price.

The SPP forecasts daily demand. Power generators bid to sell into that market based on how much they project it will cost to operate that day.

The SPP dispatches power plants from the least expensive source on up, until the day’s needs are met. The most expensive unit that gets selected in the auction essentially becomes the market price.

The market price is the price a generator gets paid for providing electricity as well as the price a utility would pay to buy it. That market system is supposed to ensure that the price of electricity remains as low as possible.

But there’s a catch.

The market allows power plants to self-commit — or send electricity to the power grid regardless of the price. Self-committing is common for regulated utilities across the country.

But it can prevent cheaper resources, often wind and natural gas, from turning on.

SPP officials tend to agree. In their 2018 annual state of the market report released in May, the SPP identified self-committing resources as a serious problem because it distorts market signals and prevents the market from running as efficiently as possible.

While the amount of power that is self-committed in the entire SPP service region is decreasing, it still made up about 30% of day-ahead bids in 2018, Kansas News Service reported.

“We could make it more efficient by reducing the number of self-commits and making it a purely economic solution,” said Bruce Rew, SPP’s vice president of operations.

But the SPP isn’t likely to prohibit the practice entirely because there are good reasons to self-commit a power plant.

Nuclear power is almost always self-committed because it’s stable and constant and isn’t really designed to be turned on and off.

Other types of electric generators, like coal, might self-commit for maintenance reasons or because it’s costly and difficult to turn on and off quickly.

According to the SPP, long-term coal purchasing agreements also contribute to the problem. The agreements often include “take or pay” clauses — provisions that require a power plant to take coal from a supplier whether or not it can burn it.

Because the cost to the utilities is the same either way, coal plants often run even when it’s not economical to do so.

Between January 2015 and December of 2017, the Westar-owned coal-burning plants Lawrence Energy Center and Jeffrey Energy Center both consistently ran uneconomically during fall and winter months.

Daniel, with the Union of Concerned Scientists, estimated that added $12 to $15 million dollars per year to Westar’s fuel costs. He said if the company just chose to operate those plants seasonally, it could go a long way to eliminating the inflated fuel costs of self-committing resources.

“If it’s going to stay online,” Daniel said, “it should operate in an economically rational way.”

Cold weather can cause problems at steam-powered coal plants if turned off for too long. The market also only takes into account short-term fuel costs, while the company has to take into account long-term factors such as maintenance and staffing.

“Our full team is looking at that whole picture,” Westar spokeswoman Gina Penzig said, “making sure that we’re being a good steward of that power plant for its lifetime.”

She also said that Westar has been working on making those coal plants more nimble — that is, more able to ramp production up or down according to market needs.

She estimated those efforts saved Westar customers $5 million in fuel costs in 2017.

In Kansas, a tiny part of every customer’s bill includes a fuel cost tariff. The tariff covers the cost Westar pays for fuel used to generate electricity and is adjusted every quarter.

It means Westar has no economic incentive to stop self-committing coal plants, regardless of SPP market prices.

“It doesn’t matter to the regulated utilities,” said Travis Kavulla, director of energy policy at the R Street Institute, a think tank that favors free markets and limited government. “Because whatever they pay in fuel . . . gets recovered from their customers, dollar for dollar.”

But it won’t, because the fuel tariff reimburses Westar for their total fuel cost.

Kavulla, who used to be a state regulator in Montana before joining R Street, said regulators could help the problem by making sure utilities have some skin in the game.

Rather than promise to recover all fuel costs, regulators could set a rate that anticipates fuel cost for a certain time period. When actual fuel costs for a utility vary from that number, investors and consumers would share any loss or profit.

Not only would that incentivize regulated utilities to negotiate better fuel contracts without “take or pay” clauses, but it could also go a long way toward minimizing self-committing power plant operation.

At the moment, very few jurisdictions in the United States implement that kind of fuel cost “tracker.” But that could be changing.

A report from the Missouri public service commission’s investigation into self-committing practices is due in mid-August.

“After all,” he said. “If I’m a Utility Chief Financial Officer, why would I spend a lot of my time trying to drive the best deal on a fuel supply contract if it’s fundamentally not going to make me any profit?”

This story is republished as an Associated Press Member Exchange