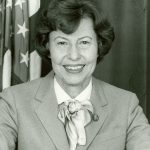 Rep. Jan Meyers, R-Kansas, is pictured during the 99th Congress.

TOPEKA — Longtime Rep. Jan Meyers, the first Republican woman elected to the U.S. House from Kansas, has died at the age of 90.

Meyers died Friday at a nursing home where she was living. The cause of death was not announced.

Meyers, of Overland Park, represented the state’s 3rd Congressional District from 1985 to 1997, after serving in the Kansas Senate from 1972 to 1984. She became the first Republican woman to lead a House committee in more than 40 years when she became chairwoman of the House Small Business Committee in 1995.

While she was a fiscal conservative and supported anti-drug legislation, Meyers broke from many Republicans by consistently supporting abortion rights and gun control.

“I mean, she was a pioneer,” Mike Murray, her former chief of staff and campaign manager, told The Kansas City Star. “She was way ahead of today’s movement for women in politics. She was on the vanguard of that. ”

“As the first Republican woman elected to the U.S. House from Kansas, she was a ground breaking public servant in many ways, and a role model for all,” Kelly said in a statement.

Sens. Pat Roberts and Jerry Moran, both Kansas Republicans, praised Meyers as a political pioneer and a trusted colleague and friend.

“She was kind, caring, honest and extremely well respected in not only the 3rd district, but the entire state,” Roberts said.

Meyers was president of the Overland Park City Council from 1970 to 1972 and in 1972 became the first female president of the League of Kansas Municipalities before being elected to the Kansas Senate.

She declined to run for re-election to the House in 1997, saying she wanted to spend more time with her family.

Meyers was born July 20, 1928, in Superior, Nebraska. She graduated with a bachelor’s of communications from the University of Nebraska in 1951. She and her husband, Louis Meyers, had a son and daughter and one grandchild.