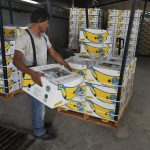 A worker stacks a box of freshly harvested Chiquita bananas to be exported, at a farm in Ciudad Hidalgo, Mexico, Friday, May 31 2019. If the tariffs threatened by United States President Donald Trump on Thursday were to take effect, Americans may see higher prices in grocery stores. The U.S. imports $12 billion of fresh fruits and vegetables from Mexico. (AP Photo/Marco Ugarte)

If the United States imposes tariffs on Mexican imports next week, the Lawrence chamber of commerce does not know how exactly it will affect the local economy, but it will likely be harmful.

“Unfortunately, we may learn that the hard way if these tariffs are sustained or ramp up as the president has threatened,” Hugh Carter, the chamber’s vice president for external affairs, said of the possible effect.

A delegation of local representatives — including the chamber, the University of Kansas and Haskell Indian Nations University — plans to meet with Kansas federal lawmakers on Wednesday and Thursday to discuss many topics that affect the Lawrence community. But one of the issues that they plan to bring up is the effect the Mexican tariffs, which are American-paid taxes imposed on foreign imports, would have on the state of Kansas, Carter said.

“While we’re not sure about the specific impacts on the Lawrence economy, there’s no question this is a tax that will be paid by American businesses and individuals,” he said. “Short-term impact on Mexico tariffs is certainly negative.”

President Donald Trump has said that the tariffs would begin Monday. But Republican lawmakers said they planned to pass legislation blocking the tariffs, just hours after Trump said attempts to stop them would be “foolish,” according to a Washington Post report.

While the Trump administration previously imposed tariffs on China partly because of the alleged theft of U.S. intellectual property, the plans for tariffs on Mexico are related to Trump’s views on immigration. He said the tariffs would start at 5% and gradually increase until the Mexican government stopped the flow of migrants entering the United States at the Mexican border.

Raj Bhala, a KU distinguished professor of law and international trade expert, said Mexico, along with Canada, was one of the largest trade partners with the United States and that imposing tariffs on such a partner was poor policy. He said the move would be especially bad because the U.S. recently renegotiated the North American Free Trade Agreement between the two countries and the U.S. “got virtually everything it wanted from Mexico,” he said.

“The U.S. achieved its negotiating goals,” he said of the deal that was finalized in October 2018. “When you achieve your negotiating goals with a trusted ally, whose cooperation you need to protect your border, and you turn around and betray them by shockingly announcing tariffs from 5 to 25%, you undermine your own credibility as a partner and you jeopardize the relationship long term.”

Along with the local chamber, the U.S. Chamber of Commerce also opposes the planned tariffs. According to the U.S. Chamber’s data, Kansas imported about $713 million of Mexican goods in 2018. If the tariffs are imposed, starting at 5%, Kansas would see $35 million in increased costs. Trump has also said that he may increase the tariffs to 25%, which would mean $178 million in additional costs.

Neil Bradley, executive vice president for the U.S. chamber, said in a news release that he was skeptical the tariffs would have the intended effect.

“Imposing tariffs on goods from Mexico is exactly the wrong move,” Bradley said. “These tariffs will be paid by American families and businesses without doing a thing to solve the very real problems at the border. Instead, Congress and the president need to work together to address the serious problems at the border.” 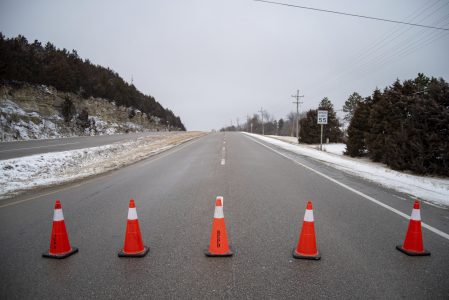