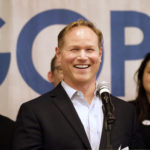 Steve Watkins speaks at an election night rally in Topeka on Tuesday, Nov. 6, 2018.

The Topeka Capital-Journal reports that Watkins, in his first term representing much of eastern Kansas, met with voters in Oskaloosa Tuesday and said fewer than 1 percent of constituents who contacted his House office mentioned the Mueller report.

“There doesn’t appear to be much there,” he said.

Watkins said building a wall on the U.S. border with Mexico would slow the influx of immigrants entering the country illegally and drug trafficking. He recently visited the border to observe enforcement activities and said he didn’t see inhumane treatment of detainees.