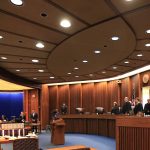 This spring, abortion rights supporters scored a massive legal victory: The Kansas Supreme Court ruled that women have the right to abortion under the state constitution.

That means even if the U.S. Supreme Court overturns its 1973 Roe v. Wade ruling, lawmakers won’t be able to ban abortion in Kansas unless voters amend the state constitution.

Abortions on the decline

A preliminary report from the state health department shows about 7,000 abortions took place in Kansas last year, about half of which involved patients from other states.

If that seems surprising, remember that the only abortion clinic in neighboring Missouri, for example, lies at the other end of that state in St. Louis (where it’s fighting for survival). The Kansas City metro area’s two abortion clinics both stand on the Kansas side of the border, in Overland Park.)

The annual number of abortions in Kansas has dropped significantly over the past few decades.

Nationally, abortion rates also have dropped, according to data collated by the Guttmacher Institute, a pro-abortion rights research center. Studies suggest somewhere around a third of women in the U.S. get abortions by their mid-40s.

In Kansas, nearly a third of the women who had last year’s 7,000 abortions were in their early 20s. Nearly nine out of 10 were in their 20s or 30s. About one in six was married.

Though in-state abortions are only available at four clinics in Wichita and Overland Park, last year’s patients came from across the state.

Kansas has passed a slew of limits on abortion, particularly during Sam Brownback’s tenure as governor from 2011 through 2018. That includes a ban on abortions after the 22nd week of pregnancy unless medically necessary to protect the mother’s health.

About 70% of abortions in Kansas last year occurred within the first eight weeks of pregnancy. About 60% involved the “abortion pill,” nearly a third involved suction abortion and about 7% were dilation and evacuation abortions.

A constitutional amendment on the horizon?

Given the Kansas Supreme Court’s ruling, abortion foes may ask the public to tweak the state constitution, perhaps on the November 2020 ballot. That would require getting a bill through the state House and Senate with two-thirds majorities before getting to the public vote. Governors can’t veto constitutional amendment bills.

Supporters of changing the constitution have different ideas about how to do so. Lawmakers could potentially ask the public to ban all abortions, for example, or to bar the state’s courts from undoing abortion limits and bans that pass the Legislature.

The wheels have started turning again on a few old lawsuits making their way through the Kansas courts. At least one new lawsuit has cropped up this year, and more could be on the way.

The Kansas Supreme Court’s landmark ruling this spring about the right to abortion stemmed from a state ban on dilation and evacuation. (The ban wasn’t actually in effect, because courts had blocked it pending the case’s outcome.) Now the case bounces back to Shawnee County District Court, which will seal the fate of the dilation and evacuation ban based on the high court’s ruling. That could mean a whole new trial, which isn’t likely before 2020.

Also at Shawnee County District Court: A Wichita abortion clinic that says it can’t find local doctors and instead leans on physicians from other states. It’s fighting to resume telemedicine abortions. (These are abortions in which the doctors work remotely with the clinic’s patients via video connection. They check whether the patient is eligible to take the abortion pill, and then guide the process.)

That legal battle involves two lawsuits and some very convoluted twists. In the simplest terms: A judge blocked the original 2011 ban on remote abortions years ago. The state, meanwhile, argues that the injunction shouldn’t apply anymore. And though a judge rejected that argument, the clinic is worried state agencies and local prosecutors won’t abide by his conclusions.

So the clinic hasn’t restarted the telemedicine abortions it stopped at the end of 2018 because it fears retaliation. As an example, it cites an ongoing investigation of its operations by the state agency in charge of medical licenses.

Other abortion restrictions on trial

Finally, litigation could undo a slew of other state restrictions related to abortion, including some that were temporarily blocked by the courts and others that were allowed to take effect.

Just a few of the restrictions targeted in ongoing lawsuits from 2011 and 2013:

• Faculty from the state’s only school of medicine can’t teach their students how to perform abortions either on or off university property.

• Women must wait 24 hours for an abortion even if the delay would kill them, according to the plaintiffs’ reading of a 2013 law. They say lawmakers tweaked the state’s exceptions such that no emergency can pass their test.

• Clinics must deliver a number of messages to patients discouraging abortion. They include hanging a message that plaintiffs argued takes 6 square feet to print in the Legislature’s chosen font size.

• Under a 2011 law, doctors need another person in the room when giving a pelvic exam to a patient who wants an abortion, even if the patient doesn’t want anyone else present.

• Clinics must do urine tests to check whether a woman’s abortion worked or whether she remains pregnant. Plaintiffs argue urine tests are less accurate than the ultrasounds and physical exams that doctors normally use.

And since Kansas has plenty of other restrictions on the books, too, such as that ban on most abortions after 22 weeks, future lawsuits based on this spring’s Kansas Supreme Court ruling could be in the pipeline.