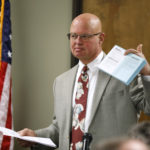 TOPEKA — The top elections official resigned Thursday in Kansas’ most populous county, which was plagued in two recent major elections by long delays in reporting results.

Kansas Secretary of State Scott Schwab’s office did not give a reason in announcing that Johnson County Election Commissioner Ronnie Metsker had stepped down. Metsker did not immediately return a telephone message left at his home seeking comment.

But Schwab spokeswoman Katie Koupal said, “It has nothing to do with the past problems.”

Johnson County kept the rest of the state waiting for its results for 13 hours after the August 2018 primary. Then-Secretary of State Kris Kobach won the GOP nomination for governor by a few hundred votes, and Metsker acknowledged being “embarrassed” by the reporting delays.

There also were significant reporting delays in the November 2016 election.

Metsker, a former Kansas House member and Johnson County Republican Party chairman, was appointed to fill a vacancy in the commissioner’s office in February 2016 by Kobach and appointed to a full, four-year term by him in August 2018. The secretary of state names election commissioners for the state’s four most populous counties, while elected clerks oversee elections in the other 101