Trump: Would talk to Pompeo if GOP risks losing in Kansas 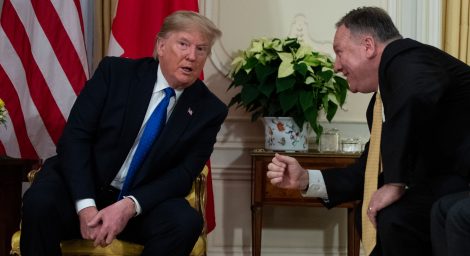 LONDON — President Donald Trump says he would talk to Secretary of State Mike Pompeo about running for an open Senate seat in Kansas if Republicans appeared at risk of losing it next year.

Trump’s comments to reporters Tuesday during a NATO meeting in London came as Pompeo dismissed speculation about his seeking the seat held by retiring GOP Sen. Pat Roberts.

Trump said if he thought Republicans might lose their first Senate race in Kansas since 1932, “I would have to talk to Mike.”

Pompeo is a former Kansas congressman. Republicans have speculated for months that he will run for the Senate.

Some Republicans fear that ex-Kansas Secretary of State Kris Kobach will capture the party’s nomination and put the seat in play after losing the Kansas governor’s race last year.