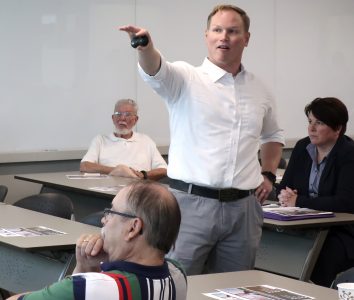 U.S. Rep. Steve Watkins, R-Kan., makes a point during a town hall meeting, Monday, Aug. 26, 2019, in Topeka, Kan. Watkins is getting heat from some frustrated constituents who want him to publicly endorse tougher gun-control measures in the wake of recent mass shootings. (AP Photo/John Hanna)

Several people left a Watkins town hall meeting in Topeka unhappy that he didn’t commit himself during the event to backing stronger background checks for firearms purchases or a “red flag” law that would allow authorities to seize guns from people deemed a danger to themselves or others. Members of the audience of about 40 interrupted Watkins when he tried to defend the GOP’s record on gun issues.

Watkins told reporters after the meeting that he’s open to looking at a red flag law and at steps to improve existing background checks because he’s willing to consider “what could make a difference.” But he also said he’s still “unequivocally” a supporter of gun rights.

Some of his constituents were unimpressed by what he said during his town hall meeting, such as expressing support for mental health funding or grants to make schools more secure.

“He had no answer,” said Steve Waugh, a retired Topeka resident and unaffiliated voter. “I wasn’t happy with his response.”

Watkins, a former Army officer and military contractor, was a political unknown when he emerged from a crowded GOP primary last year to win the 2nd District seat by less than a percentage point. In 2016, Donald Trump easily carried the district, which has Democratic enclaves in its largest cities of Topeka and Lawrence but also heavily Republican rural areas.

Many Kansas Republicans have long played up their support for gun rights and profited politically by doing so. The state allows gun owners to openly carry their firearms in public and to carry them concealed without a state permit.

But Democratic Gov. Laura Kelly, who was elected last year, recently endorsed universal background checks for gun purchases after supporting a red flag law. Her endorsement of stronger background checks came during a Statehouse rally following mass shootings in El Paso, Texas, and Dayton, Ohio, in which more than 30 people were killed.

Watkins said after his town hall meetings that he likes the idea of stronger background checks if it involves “different databases communicating better.”

As for gun control, Watkins said after the meeting, “There’s clearly no definitive solution.”

Watkins touched on a wide variety of issues during the meeting, including illegal immigration, veterans’ issues and a new trade agreement between the U.S., Canada and Mexico. 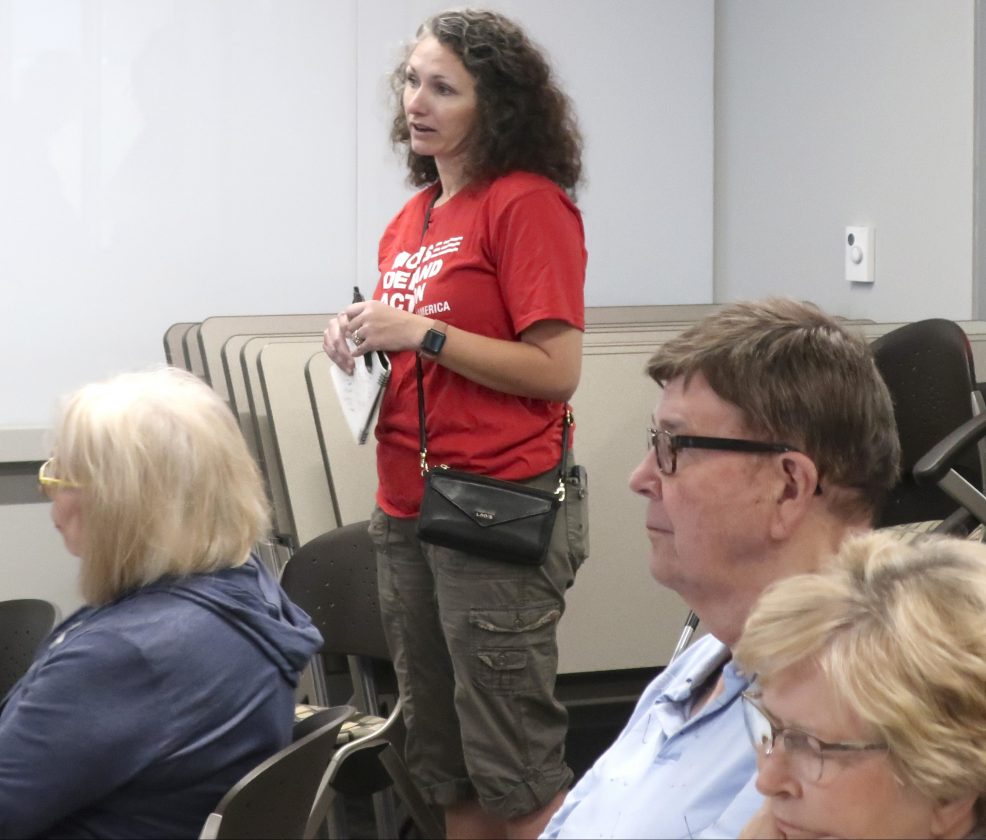 Danielle Twemlow, a gun-control advocate from Topeka, Kan., speaks during a town hall meeting held by U.S. Rep. Steve Watkins, R-Kan., Monday, Aug. 26, 2019, in Topeka, Kan. She wants Watkins to endorse proposals for tougher background checks for firearm purchases and a law allowing authorities to take guns from people deemed a danger to themselves and others. (AP Photo/John Hanna)

Gun safety arose as an issue during a question-and-answer period when Danielle Twemlow, a local leader of Moms Demand Action for Gun Sense in America, urged Watkins to support stronger background checks and a strong red flag law.

“Access to guns is really the issue,” she told Watkins.

She also pressed Watkins to explain his vote in April against a measure that passed the House to reauthorize a 25-year-old law that helps victims of domestic and sexual violence, the Violence Against Women Act. Another audience member gasped in disbelief.

Watkins did have supporters in the crowd. Mel Adams, a retired financial planner from Topeka and a Republican, acknowledged that he was skeptical of Watkins when he ran for office last year because Watkins didn’t have a record, but that, “He’s won me over.”

Adams said he could support a red flag law but worries that it would be written too broadly, so that guns could be removed from people who aren’t a danger to themselves or others.