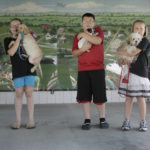 Contestants in a past Vinland Fair pet parade show off their dogs during the cutest puppy event. The pet parade has been a part of the fair for more than 50 years and one of the traditional homespun activities at the annual event that returns Thursday, Friday and Saturday to Vinland.

The organizers of the Vinland Fair believe people can entertain themselves without the help of a carnival.

“Instead of a carnival, we have sack races, a tug of war, a children’s pet parade and the tractor pull,” said Tamara Hagerman, Vinland Fair Board member with her husband, Rex. “It is old-time family entertainment.”

The 111th annual Vinland Fair will be Thursday, Friday and Saturday in the hamlet of Vinland. The fairgrounds are just east of the intersection of Douglas County Routes 1055 and 460, about 9 miles south of Lawrence.

A tractor pull has replaced the draft horse contest that was part of the 1907 Vinland Fair, but those attending the annual event will find that much hasn’t changed since the early 20th century. All the events, including the popular tractor pull, are free, Hagerman said. Not only is there no carnival, but commercial vendors are also absent from the three-day event.

The fair has been around long enough to develop its share of traditions, Hagerman said. Those include the homemade pie served at the fair’s concession stand, the chicken noodle dinners prepared though a community effort and available on Friday, and the Thursday evening talent show at which Vinland Valley residents can share their varied entertainment skills.

The tractor pull, which used to be held on Saturday evenings, has been moved to 1 p.m. Saturday, Hagerman said, which will allow the popular event to conclude at a reasonable time.

Last week as they wrapped up the family’s week at the Douglas County Fair, Vinland Valley couple David and Stephanie Norris reflected on the differences between the two fairs.

“The Vinland Fair is much more laid back,” Stephanie Norris said. “The focus is on letting the kids get involved in games.”

“I’d venture to say it attracts people for a larger distance than the Douglas County Fair because of all the family members coming back,” he said.

WICHITA — Some aviation workers who were laid off in Wichita are taking advantage of a federal program that helps ...

Garden City — A Kansas community college has reached a settlement with the New Jersey family of a football player ...