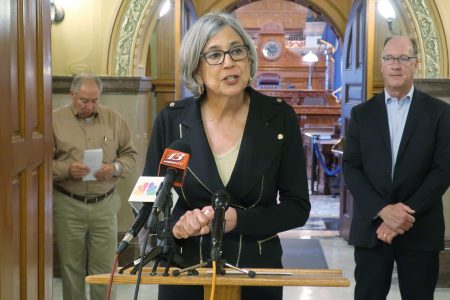 Republican legislative leaders pushed a bill that would require Kelly to get the permission of top lawmakers to extend a state of emergency past Memorial Day. It also would greatly limit her power to close businesses even with an extension and give legislative leaders the final say in how $1.25 billion in federal coronavirus relief funds are spent.

They also were considering adding some protections from lawsuits for doctors, clinics and hospitals for delaying noncoronavirus health care to the same bill. And they even were contemplating a provision that could block abortions during a pandemic, something Kelly, a strong abortion rights supporter, refused to do.

Kelly’s office said in a statement that GOP lawmakers were trying to “cram” multiple measures through the Legislature even though many “have not been thoroughly vetted by the public.”

“This is nothing more than bushwacking,” Rep. John Carmichael, a Wichita Democrat, said during negotiations between senators and House members over the final contents of the bill.

People entering the Statehouse had their temperatures checked and were quizzed briefly about whether they had coronavirus symptoms before receiving red paper bracelets permitting them to stay. Both chambers practiced some social distancing. Many Republicans didn’t wear masks during meetings, while most Democrats did. 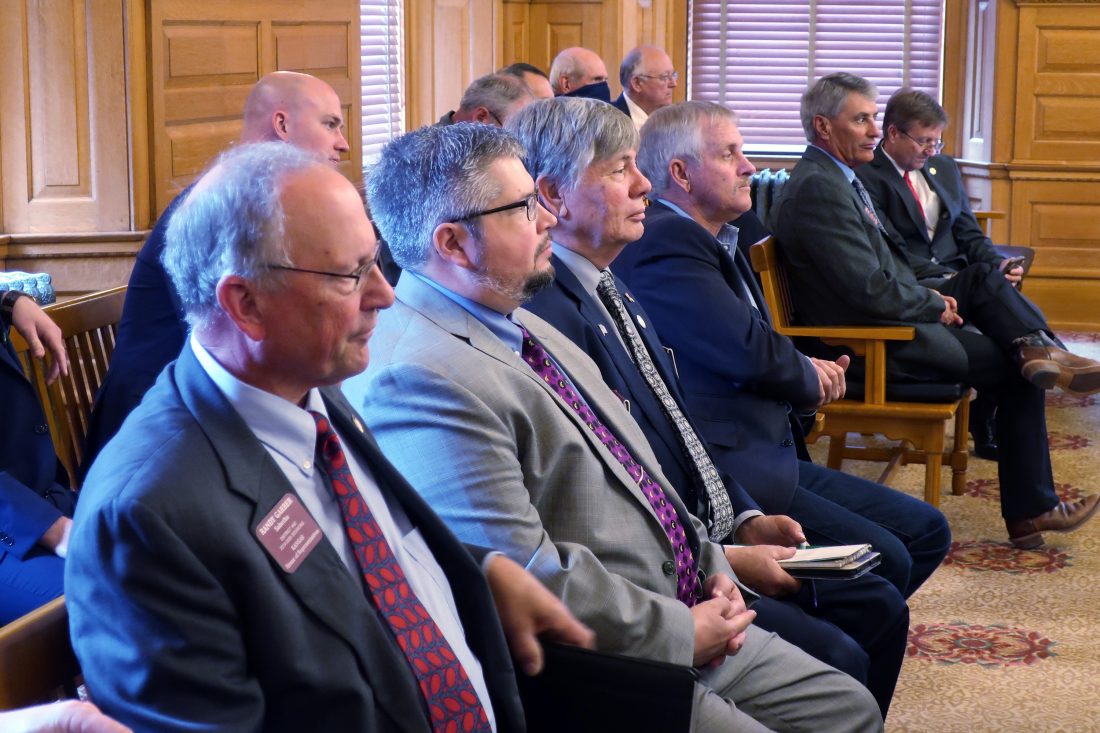 Republicans in the Kansas House have a caucus meeting to discuss lawmakers’ plans during their last scheduled day in session for the year, Thursday, May 21, 2020, at the Statehouse in Topeka, Kan. Many Republican lawmakers are not wearing masks while in meetings, while most Democrats are wearing them because of the coronavirus pandemic.(AP Photo/John Hanna)

GOP leaders wanted to wrap up work by midnight. It wasn’t immediately clear whether lawmakers could legally work after that because Thursday was their last scheduled day in session this year.

Legislators have been on a coronavirus-mandated break since March 20. Republican leaders are frustrated that Kelly ordered many businesses closed under a statewide stay-at-home order in place from March 30 until May 4 and mandated a phased reopening of the economy that keeps some restrictions until at least June 22.

Many Republicans argue that Kelly is moving too slowly to reopen the economy, and they’re upset that different types of businesses face different restrictions. Their arguments reflect complaints from business owners.

Kansas reported a 49% jump in coronavirus cases during the two weeks ending Wednesday, to more than 8,500, but that’s been driven largely by outbreaks in meatpacking plants, a state prison in Lansing and in the Kansas City area. Twenty-one of the state’s 105 counties reported no cases as of Wednesday, and 48 had seen no new cases within two weeks.

“Our goal is to pass a package to allow us to have checks and balances,” House Speaker Ron Ryckman Jr., an Olathe Republican, said during a GOP caucus in which some lawmakers sat shoulder-to-shoulder without masks.

Republicans also looked to help businesses by shielding them at least temporarily from lawsuits if business owners follow health guidelines and customers or employees get the novel coronavirus. Critics worry that their efforts to help businesses and medical providers will prevent lawsuits holding them accountable for negligence or misconduct.

The discussions came after Attorney General Derek Schmidt released a legal opinion late Wednesday saying Kelly did not have the authority to issue a second state of emergency declaration just before her first expired May 1. State law appeared to require Kelly to get legislative leaders’ approval to extend that second declaration past mid-May, and GOP leaders made sure it runs only through Monday.

If lawmakers fail to act and the state of emergency expires, all of Kelly’s coronavirus orders would lapse, leaving decisions to each of the state’s 105 counties. Advocates for the poor are especially worried about losing a ban she imposed on evictions of people who can’t pay their rent.

Schmidt said the state’s emergency-management law is clear in allowing a governor to issue only one declaration during a single emergency.

Some Democrats argue that the law still gives the governor a duty to declare an emergency whenever one exists, whatever Schmidt’s opinion. Kelly’s office said the governor welcomes a discussion about rewriting emergency-management laws “in a thoughtful manner.”

“Unfortunately, this is not an honest conversation,” Kelly’s office said, citing Schmidt’s decision to release his opinion at 11:30 p.m. Wednesday.

Schmidt has urged lawmakers to formally ratify Kelly’s past actions and extend the state of emergency, allowing her to tap broad emergency powers.

A Senate committee drafted a measure that would ratify Kelly’s past actions and extend the current state of emergency — if legislative leaders sign off. It also would limit Kelly to keeping businesses closed only for 15 more days this year, allowing county officials to decide what restrictions are in place after that.