Mask use divides Kansas lawmakers as they prepare to convene 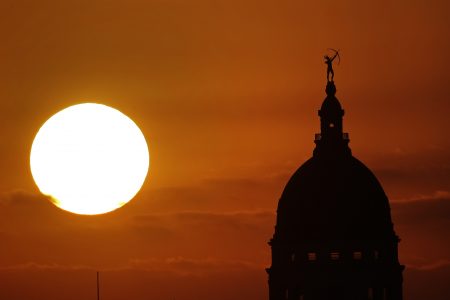 The Kansas Statehouse stands against the sky as the sun sets in the distance Monday, April 27, 2020, in Topeka, Kan. (AP Photo/Charlie Riedel)

MISSION — Kansas lawmakers are divided on the importance of masks as they prepare to convene for the final day of the session, generating concerns that the gathering could fuel a coronavirus outbreak in the Legislature.

Republican Rep. Don Hineman, a farmer from Dighton, said some lawmakers have attended open-up rallies where social distancing and other safety protocols to prevent the spread of COVID-19 weren’t followed, and that they could be carriers who aren’t yet showing symptoms. He said those lawmakers could also be the ones least likely to wear masks in the Legislature Thursday, because in some circles doing so has “become a political issue.”

Lawmakers will mostly watch the session from their offices, only leaving to cast votes in groups and speak. Although masks will be provided and lawmakers are strongly encouraged to wear them, they will not be required, according to an email from House Speaker Ron Ryckman, explaining the protocols for the one-day meeting.

Sen. Dennis Pyle, a conservative Hiawatha Republican, didn’t wear a mask Tuesday for a committee meeting at the Statehouse. He said he doesn’t criticize colleagues for wearing them — most did, plus some wore gloves — but he questioned how effective they are in blocking the coronavirus.

“I wash may hands and I take care of myself,” he said. “Putting up a chain link fence won’t stop a mosquito.”

But Hineman said the risk then is that people could become infected during the session and take the virus home to their districts.

“That,” he said, “would be a terrible outcome.”

Hineman said he is 72 and that his wife has heart issues, putting them at increased risk if they catch the virus. About two-thirds of the legislative body is considered vulnerable.

“If I feel it is not safe, I might not stay,” he said. “I think the worst thing is to drop our guard while in Topeka.”

The Legislature began its annual spring break on March 20, about two weeks early, because of the pandemic. The wrap-up session will focus on a variety of issues, including the governor’s power.

Republican Rep. Willie Dove, a strong advocate for quickly reopening the economy, said he planned to wear a mask but would push hard for a return to something closer to normal.

“We need to get back to work,” he said, noting that Kansas hasn’t had nearly the same number of cases as hard-hit New York and shouldn’t be treated the same way.

Statewide, there are 8,300 cases and 198 deaths, according to the latest data from Johns Hopkins University.