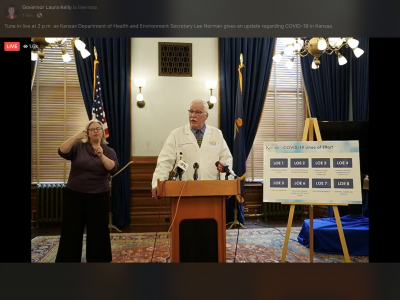 Dr. Lee Norman, secretary of the Kansas Department of Health and Environment, speaks at a news conference on Monday, May 18, 2020 at the Kansas Statehouse in Topeka.

Secretary of Health and Environment Lee Norman said virus cases linked to a gathering at Perry Lake in Jefferson County have him worried ahead of the coming Memorial Day Weekend.

That gathering, which Norman said took place in early May during Gov. Laura Kelly’s statewide stay-at-home order, has since resulted in at least 10 confirmed cases of the respiratory virus. It has also forced another 20 into quarantine and prompted the closure of the Topeka Police Recruit Academy.

“We must stay vigilant,” Norman said at a news conference Monday. “I’m not pleased that people show lousy judgement.”

Still, Norman said Kansas has contained the spread of COVID-19 more noticeably than some neighboring states. He highlighted Iowa as an example of a similarly-sized state with a much worse outcome. As of Monday, Iowa had confirmed 14,651 cases of the virus with 351 deaths in a state of 3.1 million people.

Kansas, with its population of about 2.9 million, had confirmed 8,340 cases with 173 deaths as of Monday.

KDHE is tracking 95 outbreaks of COVID-19, 47 of which are no longer active. Those outbreaks have contributed to 4,013 cases and 129 deaths, and can be traced to the following locations:

• 38 outbreaks from private gatherings, 19 of which are no longer active, resulting in 356 cases and six deaths.

• 10 from religious gatherings, eight of which are no longer active, resulting in 123 cases and 11 deaths.

• Six from group living facilities, five of which are no longer active, resulting in 55 cases and two deaths.

• Three from correctional facilities, resulting in 920 cases and five deaths. The Kansas Department of Corrections confirmed a sixth death before the press briefing Monday, announcing that an inmate at Lansing prison had died over the weekend.

• Three from health care facilities, all of which are no longer active, that resulted in 22 cases and zero deaths.

Kelly did not appear with Norman at Monday’s briefing because of a scheduling conflict. Kelly’s COVID-19 news conferences this week will take place on Tuesday and Thursday afternoons, her office said.

The governor is scheduled to travel to Washington, D.C. on Wednesday to meet with President Donald Trump. The two are scheduled to discuss Kansas’ response to the virus and the state’s phased reopening plan, in addition to ways the federal government can help protect America’s food production line and Kansas farmers.

Norman closed Monday’s briefing by reminding everyone to wear a mask when leaving their home, especially in light of the coming Memorial Day weekend.

“We can’t throw caution to the wind now. If you go out in public for any reason, wear a mask. This is CDC guidance,” he said. “I wear my mask to protect you, you wear your mask to protect me.”

Updated at 3:50 p.m. Monday WICHITA — A Kansas Board of Education primary election has drawn more attention ...