Lawsuit seeks to force disclosure of uncounted ballots in Kansas 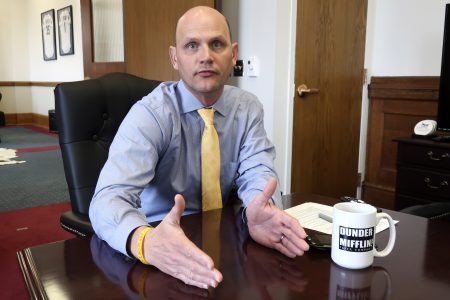 In this Tuesday, Feb. 11, 2020, photo, Kansas Secretary of State Scott Schwab answers questions during an interview with The Associated Press at his office in Topeka, Kan. (AP Photo/John Hanna)

BELLE PLAINE — The top election official in Kansas violated the state’s open records law by refusing to release the names of people who cast provisional ballots or say whether their votes were counted, according to a lawsuit filed Wednesday.

The American Civil Liberties Union sued Kansas Secretary of State Scott Schwab in Shawnee County District Court seeking a court order that would force him to disclose the information.

“We have not been served with notice of the lawsuit so it would be premature to comment until we know more,” Deputy Assistant Secretary of State Katie Koupal said in an email.

ACLU filed the lawsuit on behalf of Loud Light, a non-profit group whose mission is to increase voter turnout, and voting rights advocate Davis Hammet.

Loud Light wants the provisional voter information from the 2018 general election to be released so it can help Kansas voters correct defects on their ballots, the suit says. The group intends to submit similar requests for the 2020 primary and general elections.

The lawsuit stems from a September request by Loud Light and Hammet for information in the state election database as well as registration and poll books.

The ACLU told Schwab’s office in a letter last week that it had a “strong desire to resolve this matter without litigation” and that it wants to work with his staff.

The secretary of state’s office wanted to wait for an opinion from the Kansas attorney general’s office, but the ACLU noted no provision in the open records law allows it to delay responding for almost a year while it debates its interpretation of the law.

The ACLU pressed for the information, but Schwab’s office refused citing state and federal statutes it said prohibit the disclosure.

The lawsuit cites a 2012 ruling in which the Shawnee County District Court ordered the local county election commissioner to release the list of names of provisional ballot voters in an election for a state House seat. The court at that time rejected the argument that the Help America Vote Act prohibits disclosure of the names of provisional ballot voters.

Those records were finally released after a federal court also rejected the Kansas secretary of state’s office efforts to keep Shawnee County Board of Commissioners from complying with the state court’s order.