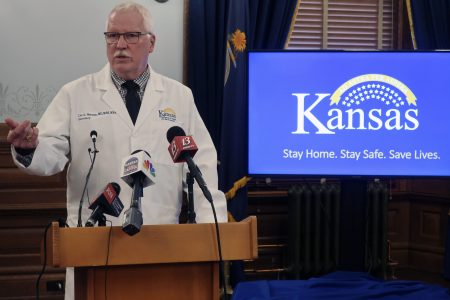 Dr. Lee Norman, the Kansas secretary of health and environment, answers questions about the coronavirus pandemic during a news conference, Thursday, June 11, 2020, at the Statehouse in Topeka, Kan.

TOPEKA — Kansas on Wednesday saw its largest jump in coronavirus cases in more than six weeks, an increase of more than 500 cases in two days.

The state health department reported the spike two days after Gov. Laura Kelly urged local officials to postpone lifting their last restrictions on businesses and public activities for another two weeks, recommending that they still limit public gatherings to 45 people. The Democratic governor ended statewide restrictions May 26, leaving decisions about the rules to the state’s 105 counties, after weeks of complaints from the Republican-controlled Legislature that she was moving too slowly to reopen the state’s economy.

Dr. Lee Norman, the state health department’s top administrator, expressed concern about the latest increase. Kelly called for slowing down the state’s reopening Monday following two weeks that saw the average daily rise in new cases increases, along with the percentage of positive results from tests, according to Johns Hopkins University.

“This is not surprising, given the laxity people have been demonstrating in protecting themselves and others,” Norman said Wednesday in a text relayed by his staff.

The Department of Health and Environment reported a total of 12,970 cases of the novel coronavirus, up 4.1% from Monday. Of the 505 new cases, 416 or 82% were not from clusters of two or more cases linked to a single location, such as a nursing home, or an event, such as a public gathering.

The state also reported an additional two COVID-19-related deaths since Monday, bringing the total to 261 since the pandemic began in early March.

The state hasn’t seen such a spike in new cases since the first half of May, when it stopped updating its figures daily. The state reported 410 new cases on May 7, another 357 on May 8, and then 615 new cases for the three days ending May 11.

Kansas has had more than 2,100 new cases of the novel coronavirus over the past two weeks, a 20% increase.