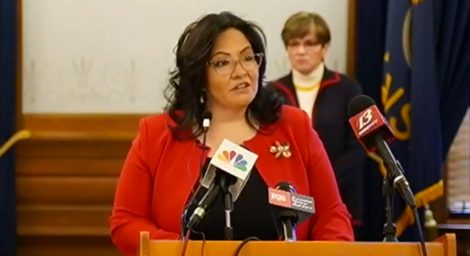 Kansas Department of Labor Secretary Delia Garcia speaks as Gov. Laura Kelly watches, Wednesday, May 13, 2020, at the Statehouse in Topeka.

Gov. Laura Kelly on Monday announced the immediate resignation of Kansas Department of Labor Secretary Delia García after the department saw months of continued struggle in processing unemployment claims for those who lost jobs because of the COVID-19 pandemic.

Kelly also cited a recent snafu in which the department processed duplicate unemployment payments to thousands of Kansans and then tried to get the extra money back — without consulting Kelly — which caused many Kansans’ bank accounts to become overdrawn. As a result, Kelly accepted García’s resignation, she said.

The issue with duplicate claims began on June 10, when more than 4,500 claimants received multiple payments of Pandemic Unemployment Assistance or Federal Pandemic Unemployment Compensation — funds created by a March federal stimulus package — totaling roughly $7 million. Last Thursday, Kelly said, the department used a process known as a clawback to recoup the duplicate payments, which caused a number of bank accounts to be overdrawn without the account holders’ knowledge.

At a news conference Monday afternoon, Kelly said that somehow the department had gone ahead with the plan to claw back funds even after being explicitly instructed by her administration not to do so.

Still, as governor, she said the ultimate blame for the department’s struggles during the pandemic lies with her.

“We will determine how this breakdown occurred and ensure that it does not happen again,” she said. “The decision was wrong, and I’m going to use all the resources I have to identify the Kansans who were wrongly targeted or who had their accounts withdrawn.”

Kelly said that anyone whose account was overdrawn — a process which usually results in a bank charging the account holder an additional fee — would be “made whole.” In a statement, she said the department is now working with partner banks to identify and reimburse any claim recipient whose account was overdrawn because of the clawback. KDOL will also create a special hotline and an email for Kansans who have been impacted.

Kelly’s deputy chief of staff, Ryan Wright, will take over the labor department on an interim basis, she said. Her office has already begun the search for García’s permanent replacement.

Wright will be faced with overseeing an unemployment system that, before the pandemic began, was operating almost entirely on software that was decades old. While some improvements were made after COVID-19 overloaded the department — it received more than 800,000 calls per day during the pandemic’s peak — many Kansans are still waiting to receive current and retroactive benefits payments.

Kelly acknowledged those challenges that García grappled with during her time as department leader.

“I want to thank Secretary García for her service to Kansas,” Kelly said. “While states around the country have struggled to manage unemployment claims during the worst public health crisis in a century, Secretary García inherited an agency that had its funding, its technology, and its staff gutted by the previous administration.”

Some Republican lawmakers called for García’s ouster last month, saying she had mismanaged the agency so badly that thousands of people were denied prompt payment of unemployment benefits.

But the governor steadfastly defended García at the time, noting that the state unexpectedly went from record low to record high unemployment rates.

“I’m thankful that the governor has finally recognized the Department of Labor is broken and thousands of Kansans who have been laid off through no fault of their own have been wronged by the system,” said Kansas Senate President Susan Wagle.

Wagle, a Wichita Republican, added that she continues to hear from unemployed Kansans who aren’t receiving checks or have been cut off from payments.

Complaints about the handling of unemployment claims have dogged officials across the country, including in Kansas, Maryland, Missouri, Pennsylvania and Oklahoma. The director of the Oklahoma Employment Security Commission also resigned following complaints about unpaid jobless claims.