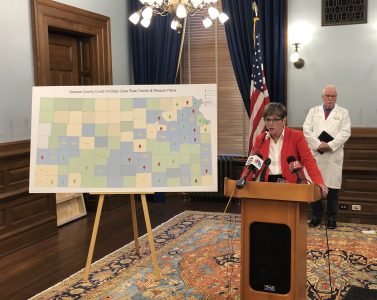 Gov. Laura Kelly speaks next to a map of Kansas counties seeing various trends related to new COVID-19 cases in a press briefing on Monday, June 15, 2020 at the Kansas Statehouse in Topeka.

TOPEKA — Thirteen counties in Kansas, including Douglas County, are experiencing an uptick in confirmed cases of COVID-19 over the past 14 days, demonstrating that the state is not yet in the clear of the pandemic, Gov. Laura Kelly said Monday.

Kelly specifically singled out Sedgwick County in south central Kansas, which chose to stop enforcing social distancing guidelines as early as May 27 — and on Friday reported its highest number of new active cases at 215.

Though Kansas as a whole is still on a positive trajectory in terms of the virus’ spread, Kelly strongly cautioned Kansans — and specifically the counties seeing increased cases — against returning to a sense of normalcy too soon. Wearing masks and socially distancing in public remains vitally important, she said.

“I know we’re all anxious to return to activities we love, but we cannot lose sight of behaviors that will allow us to begin reopening our economy,” Kelly said. “(Those actions) will halt the reopening of our economy and prevent our children from returning to school.” 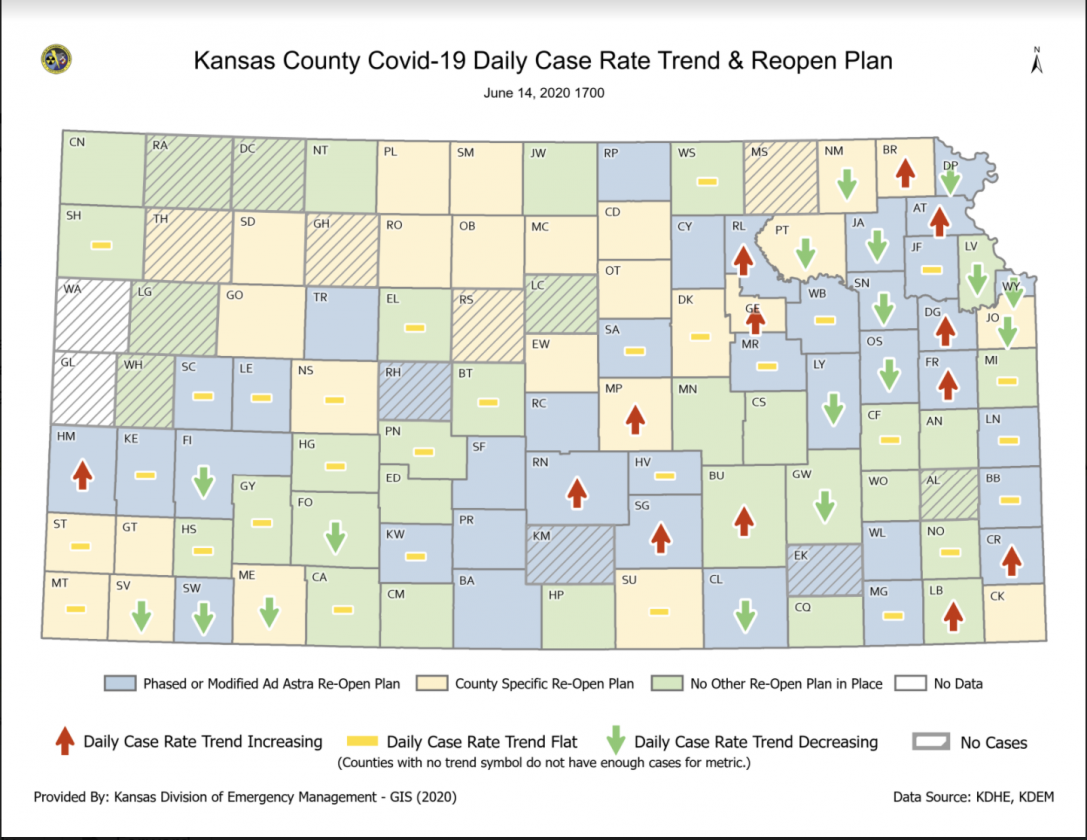 photo by: Contributed/Office of the Governor

A digital version of the map showing counties with an increased number of COVID-19 cases over the past 14 days, current as of Monday, June 15, 2020.

Kansas on Monday confirmed 372 new statewide cases of COVID-19 since data was last released on Friday, said Dr. Lee Norman, secretary of the Kansas Department of Health and Environment.

The state’s cumulative case total now sits at 11,419 and has claimed the lives of 245 Kansans, two more since Friday. KDHE confirmed only five new hospitalizations attributed to the virus over the weekend.

Between Friday and Monday morning, KDHE received 7,810 test results. With 372 positive cases in that batch, the most recent tests indicate a positive test rate of 4.8%. Overall, Kansans tested are returning positive tests at a rate of 8.3%.

In discussing the newest data and the trend map for Kansas counties, Norman repeated Monday a phrase he has used many times over the course of the pandemic: Kansans are their own preparedness.

“Just because the county opens up doesn’t mean you have to necessarily change your safety behaviors,” Norman said. “In some counties, if it’s a red arrow going in the wrong direction, even if their county leaders choose to advance to open up the county quicker, people still need to maintain their own safety behaviors.”

Finally, KDHE is currently monitoring 165 COVID-19 outbreaks, 76 of which are no longer active.

Those outbreaks have accounted for 5,740 cases and 173 deaths statewide, and can be traced to the following locations:

• 78 from private industry, 36 of which are inactive, resulting in 649 cases and six deaths

• 11 from meatpacking plants, one of which is inactive, resulting in 2,939 cases and 13 deaths

• Seven from healthcare facilities, four of which are inactive, resulting in 57 cases and no deaths

• Six from group living arrangements, four of which are closed, resulting in 55 cases and three deaths

• Four from correctional facilities, one of which is inactive, resulting in 1,026 cases and seven deaths

• Three from school or daycare facilities, one of which is closed, resulting in 10 cases

Kelly and Norman will next speak publicly about COVID-19 at a news briefing Thursday afternoon at 4 p.m. The briefings can be streamed on Kelly’s official Facebook page.