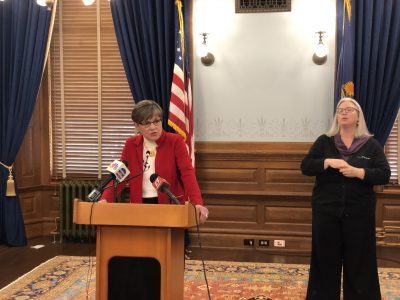 Gov. Laura Kelly speaks on Monday July 27, 2020 at the Kansas Statehouse in Topeka.

If the rate at which the deadly respiratory virus is spreading doesn’t slow — and soon — Kelly said she will have no other choice but to recommend that the state move back to Phase 2 of her Ad Astra reopening plan by next week. That means gatherings would be limited to 15 people, rather than the current 45, and bars and nightclubs would have to close.

“I do not want to go backwards,” Kelly said in a news briefing. “We can and we must do better. We cannot pretend this virus is disappearing with the summer heat, and we cannot pretend it doesn’t affect Kansans — because it does.”

Kelly reiterated Monday that COVID-19 should not be a partisan issue, and called on elected leaders across Kansas that had not done so to take proactive action, such as opting in to a mandatory mask policy. Kelly issued a statewide mask mandate in early July, but due to legislation passed in June that limited some of her authority to manage a state of emergency, all counties were allowed to opt out of the order.

An overwhelming majority of the state’s 105 counties chose to opt out, and since then only a handful have reneged on that decision to pass a local mask mandate. Douglas County issued a mandatory mask policy ahead of Kelly’s initial order, and the county health officer has also ordered the closure of all bars and nightclubs.

“Elected leaders in Kansas cannot continue to sit back in silence. The health and safety of Kansans depends on it,” Kelly said. “Just recently, in Ohio and Indiana, Republican governors decided to mandate masks statewide. Because they know that it works. We know that masks minimize the transmission of the virus.”

“And because that’s what we as leaders do. They take action,” she said. “It’s why I’ve fought to protect Kansans since the beginning of this pandemic, and I will continue to do so.”

Kelly did not specify if there was a benchmark that would force her hand in recommending more restrictive measures, and Dr. Lee Norman, secretary of the Kansas Department of Health and Environment, did not appear with Kelly on Monday, as he usually does.

Kansas on Monday confirmed 1,063 new cases of COVID-19 since Friday, bringing the state’s cumulative case total to 26,172. KDHE also confirmed nine new deaths attributed to the virus, which has now claimed the lives of 335 Kansans, ranging in age from 20 to 99.

It is unclear in the new data from KDHE how many total tests were conducted between Friday and Monday. Kristi Zears, a spokesperson for the agency, said this is because KDHE changed its methodology in how it collects and reports negative test results.

“The updated codes do not affect any of the Kansas Re-open Metrics or the number of cases,” Zears said. “For the (data) update on Wednesday, we anticipate incorporating breakouts by test type (PCR, antigen, serology) for the negative tests results.”