Candidate for Lawrence-area House seat says ads against her were racist and sexist; opponent apologizes, says he didn’t authorize

Christina Haswood, 26, is running for the Kansas House of Representatives in District 10 — which includes portions of Lawrence and Baldwin City.

Two recent ads targeting a candidate for the District 10 seat in the Kansas House of Representatives have led to an area political consultant and an opposing campaign apologizing for their content.

The ads attack the voting history of Christina Haswood, a 26-year-old candidate who would become only the third Native American in the history of the Kansas Legislature if elected. One of the ads uses a dated picture of Haswood wearing a skirt and states that she “didn’t vote for Barack Obama” despite turning 18 in 2012.

Whatever the intent of the picture choice was, Haswood told the Journal-World, it conveyed both racist and sexist overtones because it mocked a member of a traditionally marginalized community. 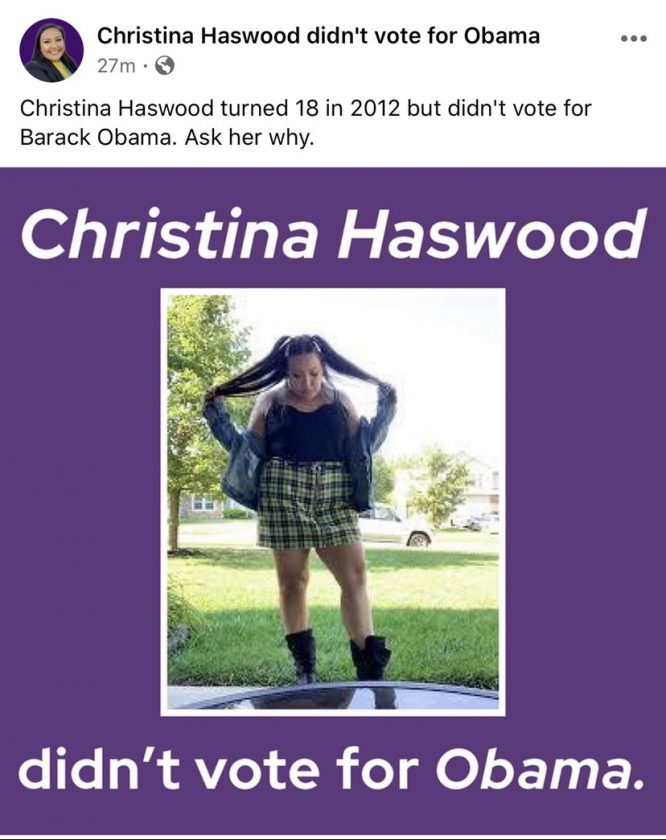 An ad launched against Kansas House candidate Christina Haswood by an independent political consultant, was described as racist and sexist.

“The notion of thinking that when you turn 18 and you vote, you don’t know the history of Indigenous people and the government. It was a very insensitive attack, especially in the district of Haskell Indian Nations University,” Haswood said. “To attack an Indigenous woman and say you didn’t vote right when you turned 18 … one person’s actions doesn’t mean they didn’t care.”

The second ad, which claimed Haswood didn’t vote against Donald Trump in the 2016 election, was simply untrue, she said. She was attending college in Arizona at the time and voted for Democratic candidate Hillary Clinton.

The ads were produced by Dave Miranda, a political consultant based in Lenexa. He had been hired on a contract basis to produce postcards for the campaign of A.J. Stevens, one of three candidates vying for the seat.

Stevens said the ads were distributed without his knowledge and that Miranda had not been paid for any work on his campaign since he hadn’t yet produced a postcard. After Stevens was made aware of the ads, he told Miranda he could no longer work for the campaign.

Stevens also said he didn’t know what motivated Miranda to distribute attack ads without Stevens’ input as the candidate.

“We thought it was wrong,” Stevens told the Journal-World Friday. “…That’s not how we run our campaign. But we hadn’t paid him for anything and he’s done no work for us.”

In a statement to the Journal-World, Miranda said that throughout his career in politics he has worked to elect progressive candidates, and that the ad, which he alone created and posted to Facebook, failed to reflect those values.

“I am sorry for the mistake I made, and I am also sorry that my intended message — that Christina Haswood didn’t vote in the 2012 elections — was overshadowed by my poor picture choice,” he said. “I made a mistake and I am deeply sorry. I take full responsibility for that mistake, which was mine, and mine alone. I apologize to those I hurt and I hope to use this experience to continue to learn and grow as a person.”

Stevens also publicly and privately apologized to Haswood for the ads, and Haswood said she accepted.

Miranda appears to have deleted the ads, but a screenshot of Facebook analytics data that was obtained by the Journal-World shows that before it was deleted, the ad claiming that Haswood didn’t vote against Trump likely reached as many as 10,000 people. The cost to promote the ad was under $100, according to the screenshot.

Haswood, Stevens and Brandon Holland, the third candidate in the race, will face off in the Democratic primary on Aug. 4 for the House District 10 seat. There is no Republican in the race, so the primary winner will almost certainly assume the seat. The candidates are vying to replace Lawrence Democrat Eileen Horn, who is not seeking reelection.