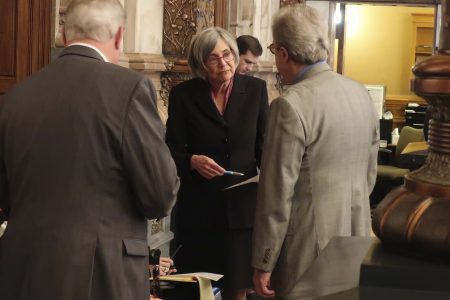 Kansas Senate President Susan Wagle, center, R-Wichita, confers with other Republican lawmakers and staffers during a debate a proposed amendment to the state constitution on abortion, Wednesday, Jan. 29, 2020, at the Statehouse in Topeka, Kan. Wagle backs the proposed amendment, which would overturn a Kansas Supreme Court decision protecting abortion rights. (AP Photo/John Hanna)

TOPEKA — Republican lawmakers in Kansas pushed a proposed anti-abortion amendment to the state constitution through the state Senate on Wednesday even as abortion rights advocates argued that it would lead to a ban on most abortions like a measure being pursued in Tennessee.

The Kansas proposal, aimed at overturning a state Supreme Court decision last year protecting abortion rights, is modeled on a change that Tennessee voters approved in their state’s constitution in 2014. Like Tennessee’s amendment, the Kansas proposal would declare that the state constitution does not “secure” a right to abortion and that legislators decide how it is regulated.

The Senate’s 28-12 vote Wednesday evening gave the measure’s backers one vote more than the two-thirds majority needed for passage, even with only Republicans voting yes. The measure goes next to the House, where the measure also needs a two-thirds majority before the question could go on the ballot for potential approval by a simple majority of voters in the state’s August primary.

Abortion opponents pitch the proposed amendment as an attempt to restore state lawmakers’ long-assumed authority to regulate abortion, not ban it.

“I don’t think anything radical is going to happen,” said Senate President Susan Wagle, a Wichita Republican who led anti-abortion lawmakers during a debate that lasted nearly five hours.

But the Kansas vote came five days after Tennessee’s Republican governor, Bill Lee, announced he would introduce legislation to ban abortion once a fetal heartbeat is detected. That can occur about six weeks into pregnancy and before many women know they’re pregnant.

“We are the canary in the mine, so Kansas can just look at us,” said Francie Hunt, executive director of Tennessee Advocates for Planned Parenthood. “It has everything to do with outlawing access to safe, legal abortion altogether.”

In Kansas, Democrats failed twice to add language to the proposed amendment to ensure lawmakers couldn’t ban abortion in cases of rape, incest or when a woman’s life is endangered by continuing a pregnancy. Wagle argued that such language could block health and safety standards for women in those situations.

But Julie Burkhart, CEO of the Trust Women Foundation, which operates a clinic providing abortions in Wichita, called the measure “a vehicle to take away the rights of Kansas women.”

Kansas elected abortion-rights Democrat Laura Kelly governor in 2018 but the GOP-controlled Legislature has had solid anti-abortion majorities in both chambers for more than two decades. It’s not clear that abortion opponents have a two-thirds majority for the proposed amendment in the House.

Wagle called the argument that the new Kansas measure could lead to an abortion ban a “scare tactic.”

The Kansas proposal differs from Tennessee’s constitutional provision by saying legislators’ ability to regulate abortion would be “to the extent permitted” by the U.S. Constitution.

The Kansas Supreme Court ruled last year that the state’s Bill of Rights makes access to abortion is a “fundamental right,” meaning state courts could invalidate restrictions upheld by the federal courts. Abortion opponents fear the loss of long – standing policies, such as parental notification when most minors seek abortions.

Wagle predicted that without a constitutional change, Kansas will have “unlimited abortion” because the Kansas Supreme court set “an impossible standard” for preserving restrictions.

“It is in essence writing the Legislature out of the equation,” said Republican Sen. Eric Rucker, of Topeka, an attorney.

Anti-abortion groups are insisting that the measure be placed on the primary election ballot. They argue that the question is less likely to get lost than in November, when President Donald Trump’s election is on the ballot.

The smaller primary electorate generally skews more conservative, and some abortion rights advocates have said they believe the proposed amendment would fail on the November ballot.

Kansans for Life, the state’s most influential anti-abortion group, urged its members in an email last week to push lawmakers not to change the election date and called any proposal to put the question on the November ballot “a poison pill.” And the Senate voted 27-13 against changing the vote to November. 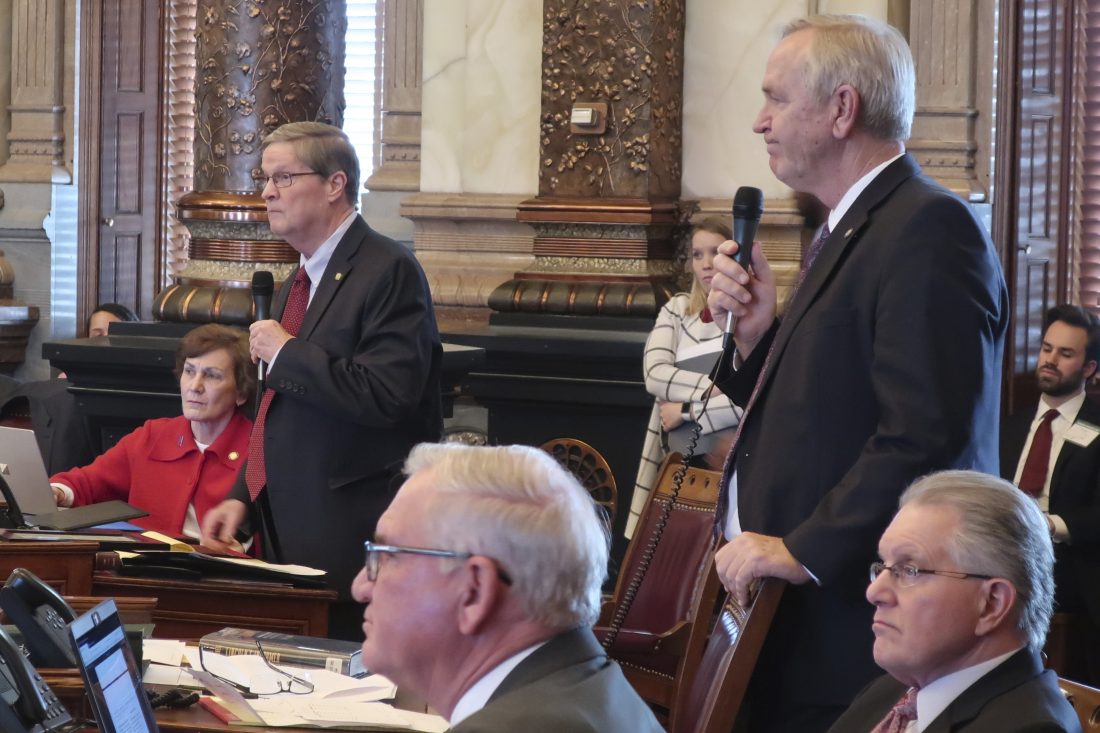 Kansas state Sens. Vic Miller, left, D-Topeka, and John Doll, R-Garden City, debate a proposed amendment to the Kansas Constitution on abortion, Wednesday, Jan. 29, 2020, at the Statehouse in Topeka, Kan. The amendment would overturn a Kansas Supreme Court decision protecting abortion rights, and Miller and Doll want to have such a measure on the ballot in the November general election instead of the August primary. (AP Photo/John Hanna) 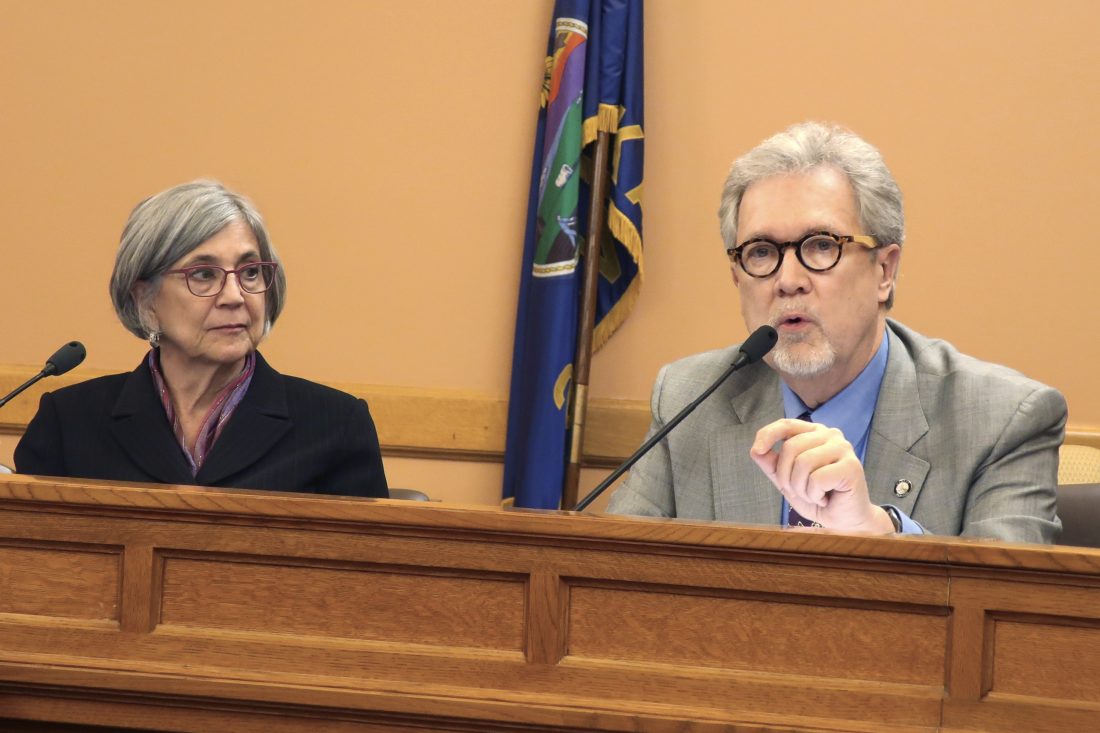 Kansas state Sen. Eric Rucker, right, R-Topeka, makes a point during a meeting of GOP senators about a proposed amendment to the state constitution on abortion, Wednesday, Jan. 29, 2020, at the Statehouse in Topeka, Kan. Watching Rucker is Senate President Susan Wagle, R-Wichita, and both support the measure, which would overturn a Kansas Supreme Court decision protecting abortion rights. (AP Photo/John Hanna) 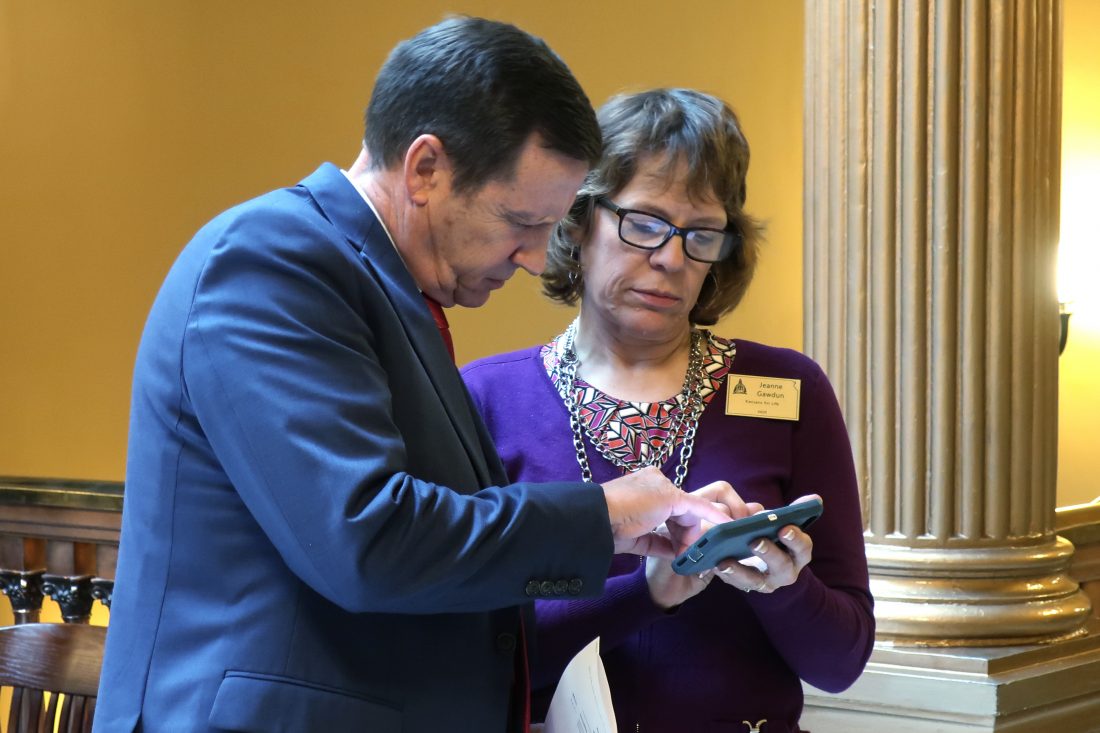 Kansas state Sen. Dennis Pyle, left, R-Hiawatha, consults with Jeanne Gawdun, right, a Kansans for Life lobbyist, following a meeting of GOP senators about a proposed amendment to the state constitution on abortion, Wednesday, Jan. 29, 2020, at the Statehouse in Topeka, Kan. The amendment would overturn a Kansas Supreme Court decision protecting abortion rights, and critics say it could lead eventually to a ban on abortion. (AP Photo/John Hanna) 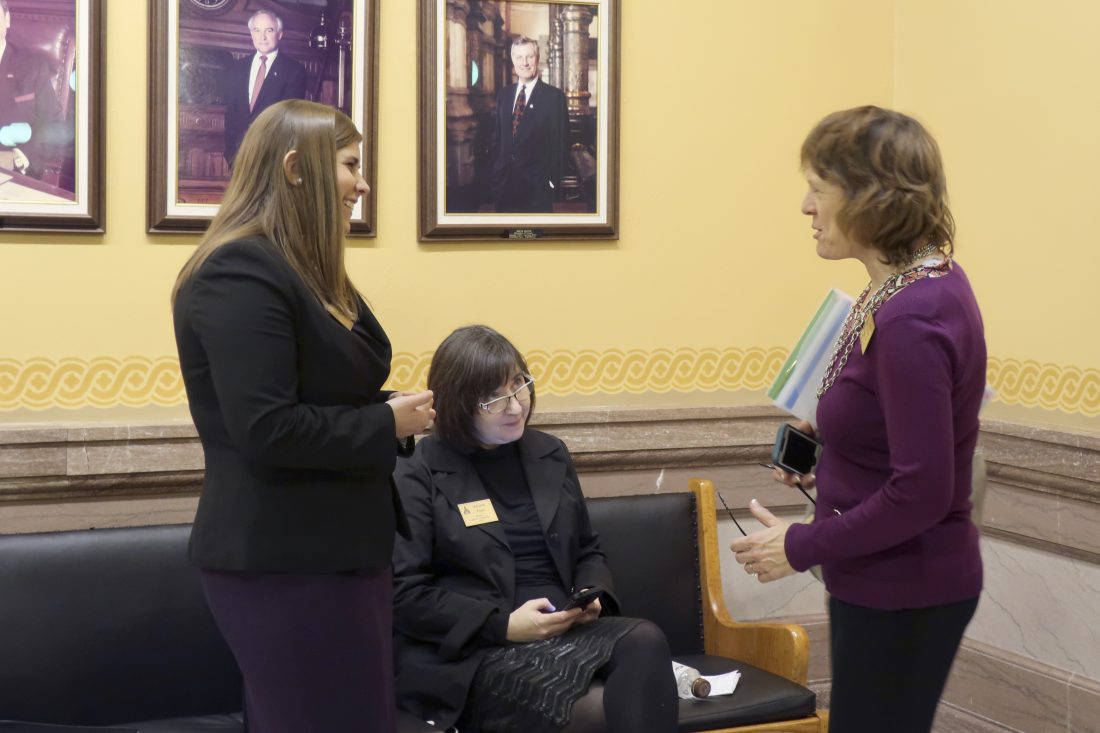 Anti-abortion lobbyists from left, Brittany Jones, of the Family Policy Alliance of Kansas; Jeannette Pryor, of the Kansas Catholic Conference, and Jeanne Gawdun, of Kansans for Life, confer outside the state Senate chamber ahead of a debate on a proposed constitutional amendment on abortion, Wednesday, Jan. 29. 2020, at the Statehouse in Topeka, Kansas. The amendment would overturn a Kansas Supreme Court decision protecting abortion rights. (AP Photo/John Hanna)