Members of a Kansas House committee indicate whether they want to be recorded as voting yes or no on a proposed amendment to the state constitution on abortion with thumbs-up and thumbs-down signs, Wednesday, Jan. 22, 2020, at the Statehouse in Topeka, Kan. The measure cleared committee on a 15-6 show of hands and would reverse a Kansas Supreme Court decision declaring access to abortion a "fundamental" right under the state constitution. (AP Photo/John Hanna)

TOPEKA — Abortion rights backers grappled with how to derail a proposed anti-abortion amendment to the state constitution as abortion foes marked Wednesday’s anniversary of the U.S. Supreme Court’s Roe v. Wade decision by advancing two versions of the proposal in the Republican-controlled Legislature.

Top GOP lawmakers want to amend the state constitution to overturn a Kansas Supreme Court decision last year declaring access to abortion a “fundamental” right. The amendment would declare that the Kansas Constitution does not “secure” a right to abortion and allow legislators to regulate it as far as federal court decisions allow.

House and Senate committees approved separate but identical versions of the measure Wednesday, and either chamber or both could debate them next week.

Abortion rights lawmakers are wrestling with a dilemma: Do they bet on the measure being objectionable enough to fail if it’s left alone, or do they try to rewrite it to make it more palatable — and risk helping it get on the ballot?

“I’m not sure what the strategy is,” said state Rep. Jim Ward, a Wichita Democrat.

The debate played out as dozens of abortion opponents came to the Statehouse to mark the 47th anniversary of the Roe decision in 1973, which legalized abortion across the nation. Since then, the court has allowed states to enact restrictions if they don’t put an “undue burden” on women seeking abortions.

Abortion opponents have long hoped that the nation’s highest court will overturn Roe. But the Kansas Supreme Court decision means that the state’s courts could invalidate restrictions — including a raft enacted in Kansas over the past decade — no matter what the U.S. Supreme Court has decided or says in the future.

Top Republicans are seeking to put a proposed amendment on the ballot in the August primary election, when the electorate generally leans to the right and anti-abortion groups believe they have the best chance of passage.

“We do have a sense of urgency,” said Kansas Senate President Susan Wagle, a Wichita Republican.

The actions of the GOP-led committees Wednesday were in keeping with the strategy of anti-abortion groups. They want their proposal to pass “clean” of changes and portray it as restoring lawmakers’ long-standing power to regulate abortion.

Supporters will need two-thirds majorities in both chambers for proposed constitutional amendment to go on the statewide ballot. Then, a simple majority of voters must approve it.

Abortion rights advocates argue that however the proposed amendment is worded, it represents a step toward an eventual attempt to ban abortion.

Yet some abortion rights supporters in the Legislature said they couldn’t formulate a good strategy on stopping a proposed constitutional amendment until they saw its exact language. Anti-abortion groups unveiled it last week.

“It’s kind of new to us, which way they were going to go,” said House Minority Leader Tom Sawyer, another Wichita Democrat.

The votes in committee came after Robin Clements, an abortion rights lobbyist, suggested to Democratic senators in a meeting Tuesday that they have a better chance of preventing the measure from clearing the Legislature if they don’t try to rewrite it to make it less objectionable.

But some Democrats want to propose changes that could include putting the measure on the November general election ballot, when they believe it stands a better chance of failing.

Clements said Wednesday that abortion rights supporters don’t want changes in the proposed amendment to make it more palatable and help it pass the Legislature. For example, GOP moderates might be more supportive if the measure is not on the primary ballot because they fear that it could drive conservative turnout and cost them competitive races.

“We have to consider those things as we count our votes,” acknowledged Rachel Sweet, a lobbyist for abortion provider Planned Parenthood Great Plains.

Some abortion opponents have been strategizing for months, and at least a few even started well before the Kansas Supreme Court’s decision in April. The lawsuit that led to the ruling began in 2015.

Kris Kobach, the former Kansas secretary of state, an attorney and former law professor, said he and two other anti-abortion attorneys began working on language in 2017. Kobach, the unsuccessful GOP nominee for governor in 2018, said their language was “very close” to what lawmakers are considering now.

The House committee’s 15-6 party-line vote for the amendment came after a 90-minute debate. Democrats unsuccessfully sought to rewrite the proposal, mostly to tone down its language.

The Republican-dominated Senate panel approved its measure on a voice vote without debate or Democrats offering proposed changes. The committee’s top Democrat, Sen. Vic Miller, of Topeka, called it “pointless.” 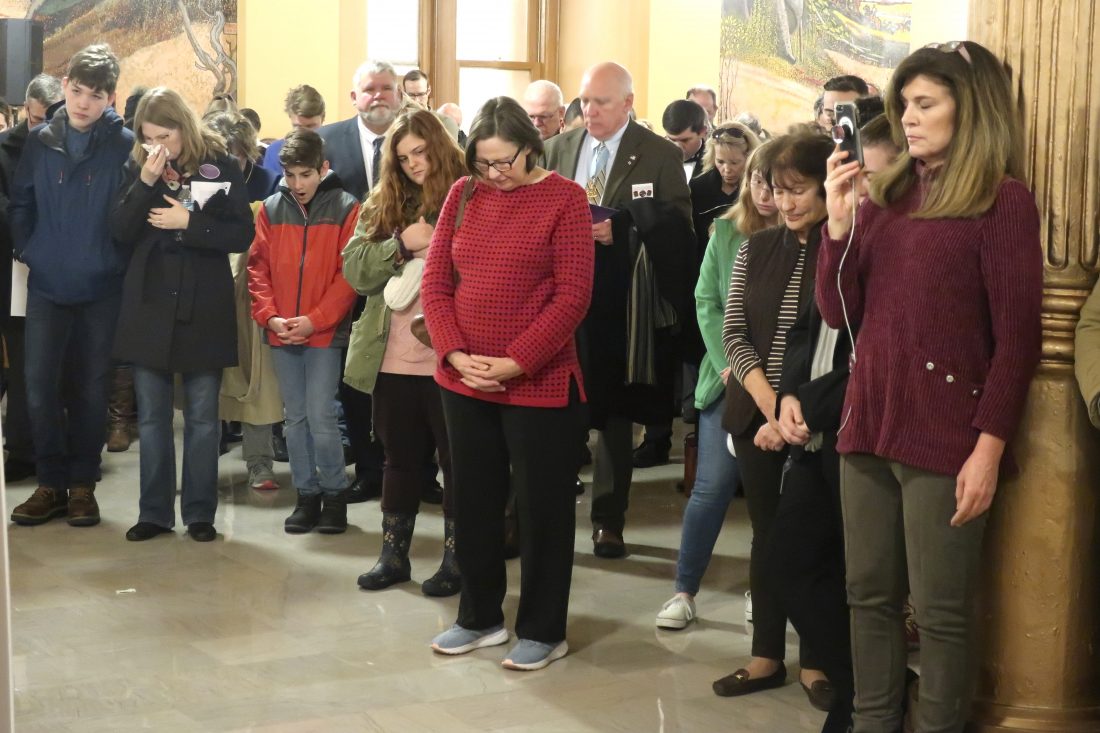 Abortion opponents pray at the end of a rally marking the 47th anniversary of the U.S. Supreme Court’s 1973 Roe v. Wade decision legalizing abortion across the nation, Wednesday, Jan. 22, 2020, at the Statehouse in Topeka, Kan. Anti-abortion groups in Kansas are pushing for a proposed amendment to the state constitution to overturn a Kansas Supreme Court ruling that made it possible for state courts to protect abortion rights more than federal courts. (AP Photo/John Hanna)