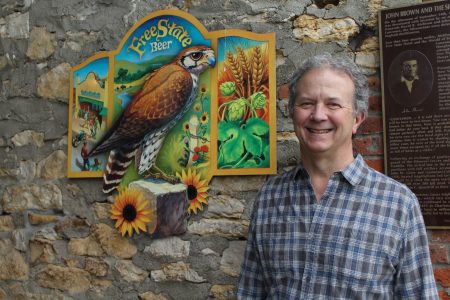 Magerl, owner of the state’s first legal brewery since Prohibition, said that showcasing Kansas’ history was something he’s committed to — “making people aware of what has been and what can be.”

And Kansas history is something Magerl hopes the state will be able to showcase in its tourism initiatives.

In December, Magerl was appointed by Gov. Laura Kelly to the state’s Council on Travel and Tourism, where he will serve as the restaurant industry representative.

“Chuck Magerl has had a fundamental role in creating successful, appealing businesses and events in Lawrence,” Kelly said in a news release. “His expertise will be welcome in encouraging successful strategies that promote the tourism industry in Kansas.”

In addition to being the proprietor of Free State, 636 Massachusetts St., Magerl is also a managing partner at Lawrence’s WheatFields Bakery, 904 Vermont St.

He assists with numerous events in Lawrence and the state, including the Dirty Kanza bicycle race in the Flint Hills, the Kansas Craft Brewers Exposition, the Lawrence Busker Festival, the Kansas State Fiddling & Picking Championships and open house events at Haskell Indian Nations University.

“I feel like my years of exploration of Kansas and my honest enthusiasm for new discoveries is something that can be shared with others,” Magerl said, adding, “my interest in promoting events and activities that we’ve done here in Lawrence are backgrounds that I can contribute to this group.”

He was approached by a restaurant association group about potentially serving.

Kansas should “invite discovery rather than invite tour buses,” he said. “Not to say that there aren’t places where tour buses aren’t fabulously appropriate.”

He called Kansas “vast” and “varied,” and said tourism and travel initiatives should broaden people’s understanding of the state.

“The more pride we can take in our history and our people, the better the opportunities for our future,” he said.