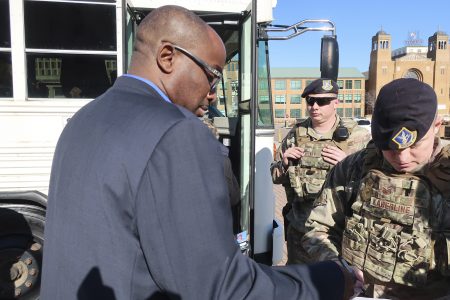 TOPEKA — Foreign governments are trying to get proprietary information about Kansas business and agricultural assets, state legislators heard Tuesday in extraordinary, secret briefings with a U.S. Department of Homeland Security official, according to participants.

Lawmakers who attended one of the unclassified briefings also said they were warned to be careful about opening emails from foreign sources. But they also said they did not hear about immediate threats.

“We need to be careful in responding to people because everyone’s looking for an in, some way, somehow,” said state Rep. Jim Gartner, a Topeka Democrat who attended the first briefing. “That was the gist of it.”

Legislators saw the briefings as highly unusual because they were conducted on a former Air Force base south of Topeka. Lawmakers were required to ride to the site in unmarked and whitewashed National Guard buses, with lawmakers assigned to specific buses. Staffers and reporters were not allowed to go.

Democratic Gov. Laura Kelly’s administration acknowledged Tuesday that the briefings were set up at her request in coordination with the state’s director of homeland security and Republican Kansas Attorney General Derek Schmidt’s office. Deputy Attorney General Jay Scott Emler, a former state Senate majority leader, was among those addressing the lawmakers, according to participants.

The briefing Tuesday came less than five months after a federal indictment charged a University of Kansas associate professor of secretly working for a Chinese university while doing research in Kansas on projects funded by the U.S. government. The professor contends that a visiting scholar fabricated the allegations, and is trying to get the criminal charges dismissed.

The Kansas State University’s campus in Manhattan is home to a new, $1.25 billion national biosecurity lab that is expected to start operations by 2023.

The public disclosure of the security briefings Tuesday created an immediate buzz in the Statehouse. Leaders in both parties said beforehand that they didn’t know what the briefings were about and worried that they would be briefed on an emergency.

That turned out not to be the case. House Democrats, who had the first briefing, said it involved general information about potential security threats. Some of them even described the briefing as “routine” and “just education.” At least a few were disappointed.

“This was not handled well,” said Rep. John Carmichael, a Wichita Democrat. “Why didn’t they just simply announce that legislators were going to receive a security briefing about various attempts of foreign intelligence services and others to make contacts with public officials and just explain it like that?”

Senate Minority Leader Anthony Hensley, another Topeka Democrat and the Legislature’s longest-serving member, said he cannot recall a similar security briefing in his 44 years as a lawmaker. Senators expect their briefings by next week.

House Minority Leader Tom Sawyer, a Wichita Democrat, whose public announcement in the chamber about when the first buses would leave set off the buzz, suggested afterward that an email to lawmakers might have sufficed.

“It’s not worthy of all the to-do,” Sawyer said.

Emler’s letter said only that the briefings concerned issues that legislators “may encounter in the course of their official duties.”

Carmichael said: “They told us, of course, that they don’t want us telling the press what was said there, that it’s none of the press’ business.”

Correction: The Associated Press misidentified the location of the Kansas State campus where a national biosecurity lab will be located. The lab will be in Manhattan.