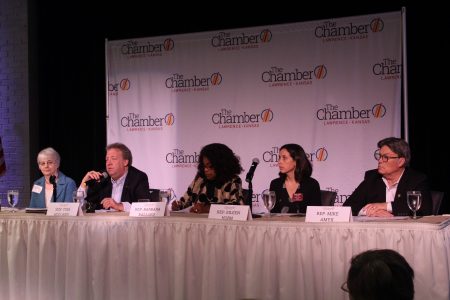 Thursday’s announcement from Topeka about a bipartisan Medicaid expansion plan was met with unanimous approval from speakers at the annual Legislative Priorities Breakfast Friday in Lawrence.

The plan, proposed by Democratic Gov. Laura Kelly and Senate Majority Leader Jim Denning, R-Overland Park, would cover as many as 150,000 additional people.

The crowd of about 130 people broke into applause.

Sen. Marci Francisco, D-Lawrence, said the proposal “clears the way for the Legislature to work on other health concerns.”

Among those concerns, Francisco named implementing limitations for tobacco and vaping products, more funding for the public health department and supporting the regional crisis center. 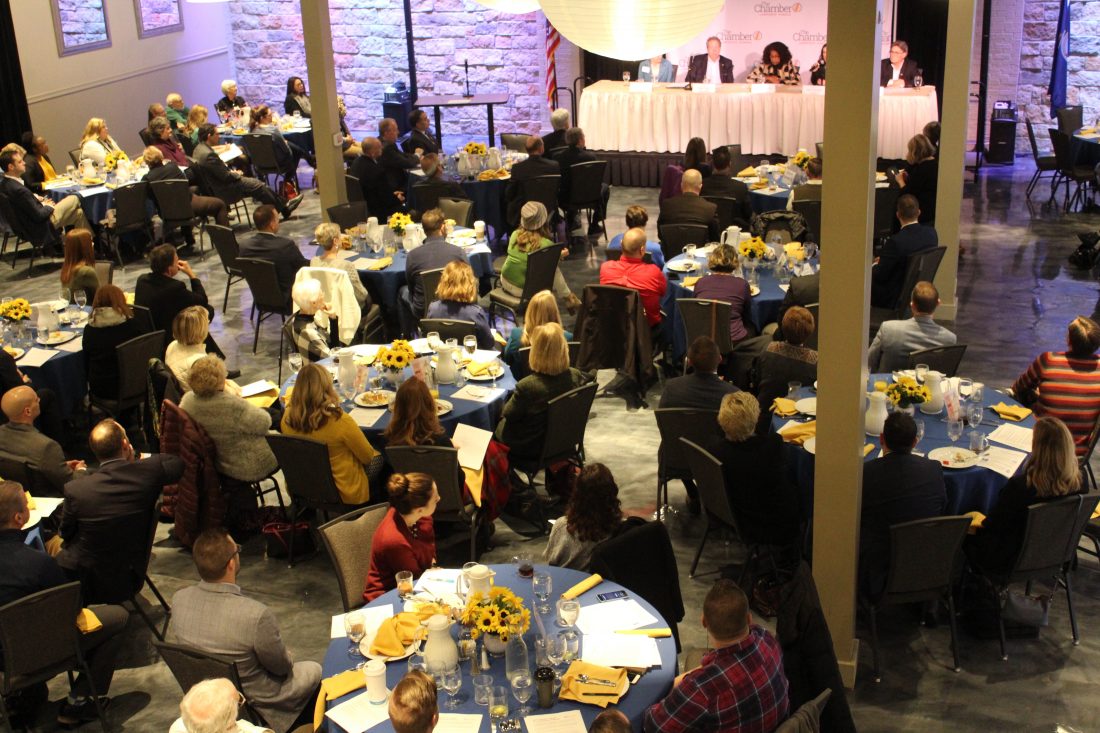 Both the city and the county listed expanding the South Lawrence Trafficway and funding the crisis center portion of the Treatment and Recovery Campus of Douglas County as priorities. The Chamber requested sufficient funding for the Department of Commerce and granting the Kansas Board of Regents request for an additional $85.3 million in funding for state universities, two-year colleges and and career and technical schools. KU also asked for the Regents’ request for higher education funding to be fully granted; $50 million would go to the state universities. Lastly, as previously reported, the Lawrence school district asked the legislators to consider gun control and anti-tobacco measures.

A full list of each organization’s priorities can be found online at lawrencechamber.com/priorities.

Each state legislator also had around five minutes to share his or her priorities with the crowd. Francisco and Sen. Tom Holland, D-Baldwin City, were present, in addition to Democratic Reps. Barbara Ballard, Eileen Horn and Mike Amyx. Rep. Dennis “Boog” Highberger, D-Lawrence, could not attend because he had a legislative committee meeting at the same time as the event.

Many of the state lawmakers noted priorities consistent with what the Journal-World previously reported in its series in advance of the 2020 session.

Francisco emphasized her support of making the Food Sales Income Tax Credit refundable and funding the Ad Valorem Tax Reduction Fund to use a portion of the state sales tax to help local governments reduce the property tax burden.

Francisco also spoke on behalf of Highberger and said he was hoping the Legislature would take aggressive action on criminal justice reform so that Kansas would not have to build another prison.

Holland said he would be introducing a new workforce development bill to be co-sponsored by Sen. Molly Baumgardner, R-Louisburg. The bill would provide scholarships to qualifying high school graduates or adults looking to complete an associate’s degree or certificate program.

“We want to be sure that kids coming out of high school as well as adults who are in dead industries or jobs, that they can retrain and move the state forward,” he said.

Holland also outlined other bills he is working on, including one that would freeze property taxes for senior citizens and disabled veterans, and one that would provide a tax abatement for three years on any agricultural building or structure that is at least 50% destroyed by a natural disaster.

Ballard said she intended to find out why schools have stopped scoliosis screenings. The need to screen for scoliosis, a painful curvature of the spine, was brought up previously at the breakfast by Johnson, who is president of the Lawrence school board.

Ballard also said she planned to monitor K-12 funding and fight to get guns off university campuses.

Amyx mentioned that he was recently appointed to the higher education budget committee.

“In the last 10 days I’ve tried to learn as much as I possibly can about higher ed, and I look forward to working with you at the university on requests as they come forward,” he said.

He also mentioned the importance of expanding the South Lawrence Trafficway, a project that would take place in his district.

Horn discussed the need to improve access to broadband and health care in rural Kansas. She also told people in the crowd that they needed to reach out to legislators throughout the session and to let them know how their work was affecting lives outside the Statehouse. Sometimes legislators get trapped in “dome logic,” she said.

“We really need to hear from all of you throughout this session,” she said. “This breakfast is great to know where we stand now. But as my colleague said, things move fast and you can reach out to us and let us know how the policies we are discussing impact you, your family, your business, our community. That’s really critical to shape our perspective.”