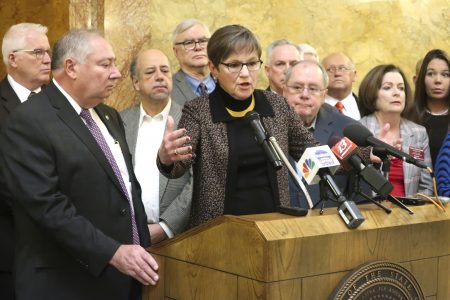 Kansas Gov. Laura Kelly, center, answers questions from reporters about a new Medicaid expansion plan as lawmakers and other advocates watch, including Senate Majority Leader Jim Denning, second from the left, during a news conference, Thursday, Jan. 9, 2020, at the Statehouse in Topeka, Kansas. (AP Photo/John Hanna)

TOPEKA — Kansas’ Democratic governor and a top Republican lawmaker on Thursday outlined a new proposal for expanding the state’s Medicaid program, breaking an impasse that had allowed a handful of GOP leaders to thwart bipartisan legislative majorities.

The plan from Democratic Gov. Laura Kelly and Senate Majority Leader Jim Denning would give Kelly the straightforward expansion of state health coverage that she has advocated, covering as many as 150,000 additional people. But Denning would get a version of a program that he has proposed for driving down private health insurance premiums to make it less likely people would drop existing private plans for Medicaid.

Denning had proposed financing his new program by increasing tobacco taxes, including a $1-per-pack increase in the state’s cigarette tax, to $2.29. His compromise with Kelly gives the state a year to develop the premium-reduction program and drops the tax increase, which Kelly and many lawmakers thought wasn’t likely to pass anyway.

The governor’s deal with Denning, a Kansas City-area Republican, means an expansion bill is all but certain to pass during the Legislature’s annual session, which convenes Monday. Bipartisan majorities in both chambers support expansion.

“Compromise is hard. It’s messy and it’s slow, but it is so worth it,” Kelly told about 200 expansion supporters during a news conference in the Statehouse rotunda. “While this announcement does not automatically translate into a bill signing, I am more optimistic than ever that Kansas will reach that point.”

The House passed an expansion plan last year, but Denning and other GOP leaders were able to keep it bottled up in a Senate committee. They cited concerns about the state’s potential costs and how expansion would be administered.

“In the spirit of compromise, we have a really good, complete plan,” Denning said.

Thirty-six states have expanded Medicaid or had voters approve ballot initiatives. The Kansas Legislature approved a plan in 2017, but then-GOP Gov. Sam Brownback vetoed it. Kelly made expansion a key promise of her successful 2018 campaign, arguing it would help thousands of working families and bolster struggling hospitals, particularly in rural areas.

But top GOP senators had promised to allow a debate on expansion this year. Denning floated his alternative proposal — with a more modest expansion than Kelly wanted — before having weeks of discussions with her.

The Rev. Sarah Oglesby-Dunegan, a Unitarian minister from Topeka who staged a pro-expansion protest in a Senate gallery in late May that stalled lawmakers’ work, called the compromise plan “a great way to start” the Legislature’s annual session.

“We’ll still be here to put the pressure on until the vote happens and it’s final-final, and then I’ll be ready to celebrate,” she said.

Denning had political incentives to push for an expansion plan this year. Kelly carried his home county by nearly 19 percentage points in 2018, and President Donald Trump’s problems with suburban voters also makes Denning’s seat a top Democratic target this year.

She added, “Socialized government-run health care is not the answer.”

Yet Denning’s willingness to work with Kelly has left even some ardent opponents of expansion anticipating passage after nearly a decade of debate.

Kansas’ $3.8 billion-a-year Medicaid program covers more than 341,000 low-income, elderly and disabled Kansas residents. However, non-disabled adults without children don’t qualify, and adults with children must have incomes well below the federally set poverty level to be eligible for coverage.

Kelly has said the expansion would cover as many as 150,000 additional people. The nonpartisan, nonprofit Kansas Health Institute has said Medicaid would cover about 130,000 more people but has projected that nearly 55,000 of them would switch from private insurance.

The federal Affordable Care Act of 2010 encouraged expansion by promising states that the federal government would pick up the bulk of the extra cost, 90% for Kansas. Brownback and other Republicans in Kansas were wary of the cost of even the state’s 10% share and viewed the federal health overhaul — former Democratic President Barack Obama’s signature domestic achievement — as damaging to the economy.

The new expansion proposal would extend Medicaid coverage on Jan. 1, 2021, to Kansas residents earning up to 138% of the federal poverty level, or $29,435 for a family of three.

The new proposal also includes Denning’s proposal for a “robust” program to refer Medicaid recipients to services to help them find and train for jobs. Some GOP conservatives want to go further by imposing a work requirement, something Kelly and others consider legally questionable.

The proposal also would allow the state to charge new Medicaid participants a premium of up to $25 per individual and $100 per family. It also would ask hospitals to kick in $35 million a year to cover the state’s costs. 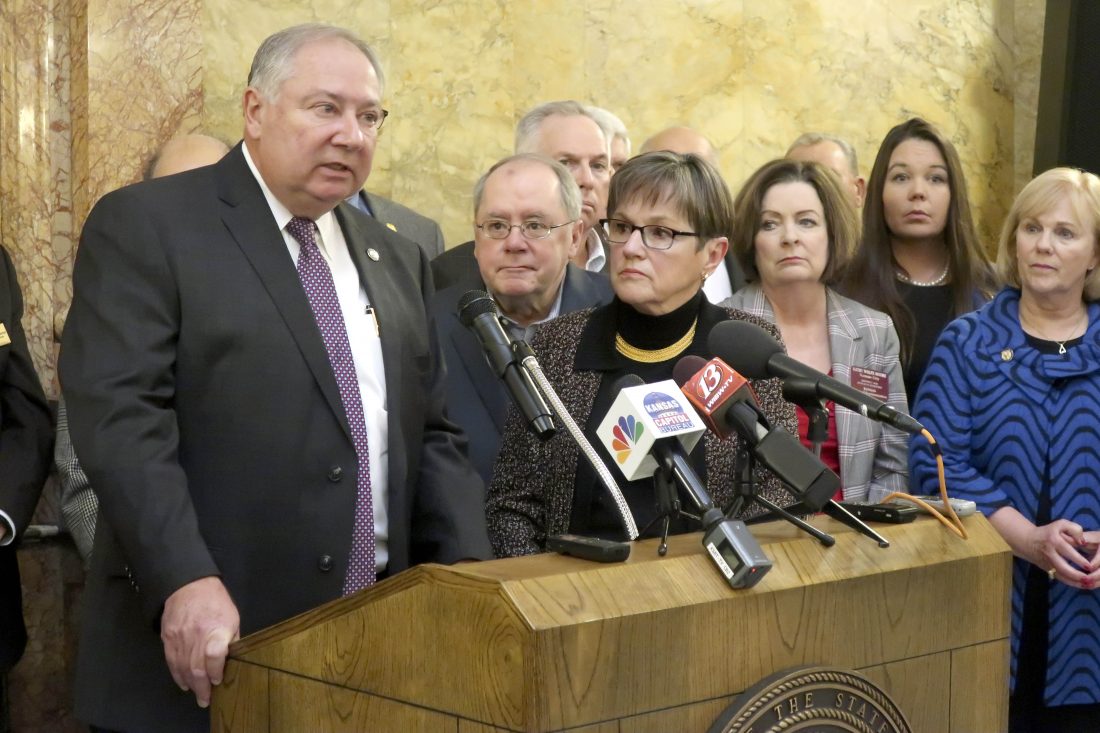